Andijan region can be a gateway to CIS countries for Indian companies,say Mr. Mansurov
Press Release
by aiai-india

Andijan region can be a gateway to CIS countries for Indian companies,say Mr. Mansurov

“Uzbekistan, the largest country of Central Asia has strong historical relationship with India. Trade, investment and cultural industries are the key focus areas of our relationship. India’s Prime Minister Narendra Modi and Uzbek President Mirziyoyev decided to draw roadmap for mutual partnership when they met at Astana on the sidelines of the SCO Summit in June 2017. The large industrial region of Andijan is a potential gateway for Indian companies to CIS region. Soon, we will set up Uzbekistan-India pharmaceutical zone in this region. Indian companies investing in that region will be eligible for tax benefits,” said Mr. Azamjon Mansurov, Second Secretary, Embassy of Uzbekistan to India during an interactive meeting with a 15-member High-Level Delegation of Business and Government officials from Andijan region at World Trade Centre Mumbai. Members of the delegation represent industries such as pharmaceutical, chemicals, medical equipments, textile and tourism.The interactive meeting was organised byWorld Trade Centre Mumbai and All India Association of Industries (AIAI) in association with Uzbekistan Embassy in India.

Speaking about the economic potential of Uzbekistan, Mr. Mansurov said, “Uzbekistan is the leading manufacturer of natural textile products, which are exported to more than 100 countries. The country produces more than 3 lakh cars, 3,000 types of food products, 20 varieties of mobiles and smartphones, 2300 varieties of drugs and pharmaceutical products and wide range of household appliances, chemical products, leather goods and agricultural machineries, to name a few. Over the years, the country has progressed from a predominant exporter of cotton to exporter of manufactured products, which constitute 80% of total shipments today. Companies in Uzbekistan participate in more than 1,000 international exhibitions annually.”

In his welcome address, Mr. Vijay Kalantri, President, All India Association of Industries and Honorary Consul General of the Republic of Uzbekistan in Mumbai remarked, “India and Uzbekistan share cultural linkages in architecture, dance, music and cuisine. The visit of this high level business delegation offers tremendous opportunity not only to improve trade but also to explore joint venture among companies in both the countries. I hope this interactive meeting will strengthen collaboration between Uzbekistan and India in pharmaceuticals, tourism and textile sectors. Uzbekistan has tremendous tourism potential given its historical cities such as Samarqand, Bukhara, Khiva and so on. Indian companies can take advantage of the Free Economic Zones in Uzbekistan by setting up manufacturing plants in these zones and exporting the products to CIS countries.”

Mr. Kalantri emphasised the need for launching direct flight connectivity from Mumbai to Uzbekistan to promote tourism and trade between the two countries.

In his remarks, Mr. Ibragimov Yusufbek, Deputy of Mayor, Andijan city Government said, “The year 2018 has been declared as the year of Entrepreneurship and Innovation in Uzbekistan. The law of Uzbekistan protects the rights of foreign investors. Especially, we offer preferential treatment and tax benefits to investors from India. Through this meeting, we seek to forge long term relationship with India. I hope this event will generate fruitful and sustainable collaboration between the business community of India and Uzbekistan.”

Speaking on this occasion, Mr. Abdullaev Elyorbek, Deputy of Governor, Government of Izboskan district said, “We invite Indian companies to invest in Andijan region, which is endowed with significant natural resources. We encourage Indian companies to produce value added goods and export them to neighbouring countries. We are willing to offer land and other resources to Indian companies. I hope both the countries can strengthen their relationship through collaboration in trade and investment.”

Speaking about the advantage of Andijan region, Mr. Ismoilov Sardorbek, Specialist, Investment department of Government of Andijan said, “Andijan accounts for 10% of the population of Uzbekistan and it is the most densely populated region in the country. This ensures a huge consumer market for companies. The economy of Andijan grew 159% between 2012 and 2017. Andijan contributes 7% to the industrial production of Uzbekistan. Four Indian companies have commercial presence in Andijan through joint venture.”

Mr. Sardorbek explained the tax incentives and other preferential treatment given to foreign investors in the Andijan region as announced through a President`s decree.

As part of the event, distinguished members of the delegation made presentation on the economy of Uzbekistan and the potential business opportunities in tourism and pharmaceutical industries in the Andijan region.

The event witnessed more than 500 B2B and B2G meetings among officials from textile, pharmaceutical and tourism industries in India and Uzbekistan.

The interactive meeting was attended by consular corps and representatives from trade, industry and financial institutions. 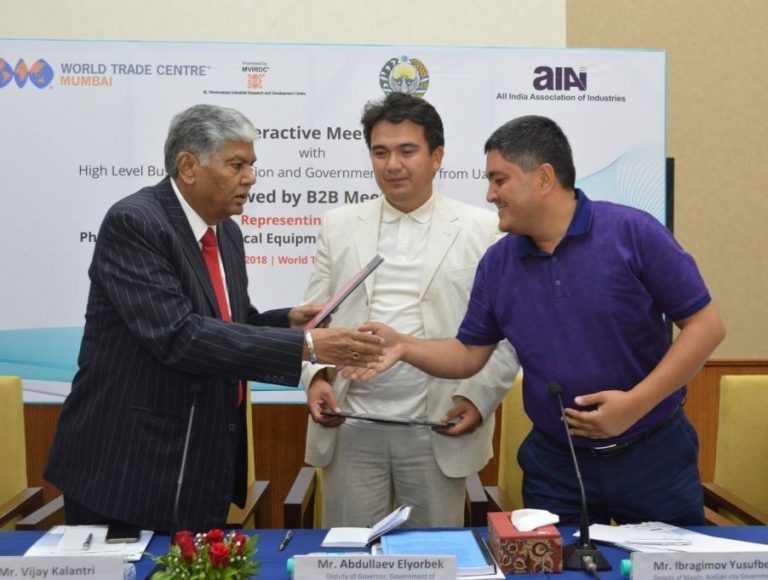 Mr. Ibragimov Yusufbek, Deputy of Mayor, Andijan City Government (Right) being felicitated by Mr. Vijay Kalantri, President, All India Association of Industries and Honorary Consul General of the Republic of Uzbekistan in Mumbai. Also seen in the photograph is Mr. Abdullaev Elyorbek, Deputy of Governor, Government of Izboskan district (Middle)