Argentina and India to Foster Cross Border Trade and Investment

Mr. Meyer said that Argentina produces nearly 800 thousand automotives per annum. Thus the country is in need for automotive parts and components. It may be noted here that India holds competitive advantage in auto engineering. We invite the Indian automotive industry to set up factories in Argentina to serve its requirements of auto parts and components. Also, the two economies may share technical expertise in manufacturing of automobiles.

Lastly, Argentina is a leading producer of vegetable oils such as soya oil, sunflower oil, etc. As a by-product the country manufactures biodiesel from the biomass of soyabean and corn. The Indian economy may look up to Argentina for meeting its requirements of vegetable oils and bio-fuels, Mr. Meyer noted.

Additionally, Argentina holds expertise in the fields of renewable energy and mining. Sharing of expertise in these areas may be advantageous to the Indian companies, Mr. Meyer added.

Earlier, in his welcome remarks Mr. Vijay Kalantri, Vice-Chairman, MVIRDC World Trade Centre and President, All India Association of Industries said the bilateral trade between India and Argentina is merely US$ 1.7 billion. India’s exports to Argentina comprise of organic Chemicals, vehicles and auto parts, lubricants, machinery, sound and image devices and garments among others. India´s imports from Argentina are soybean oil, sunflower oil, leather, wool and ferroalloys. However, the two economies must further trade and investment opportunities through exchange of delegations, seminars and meetings. 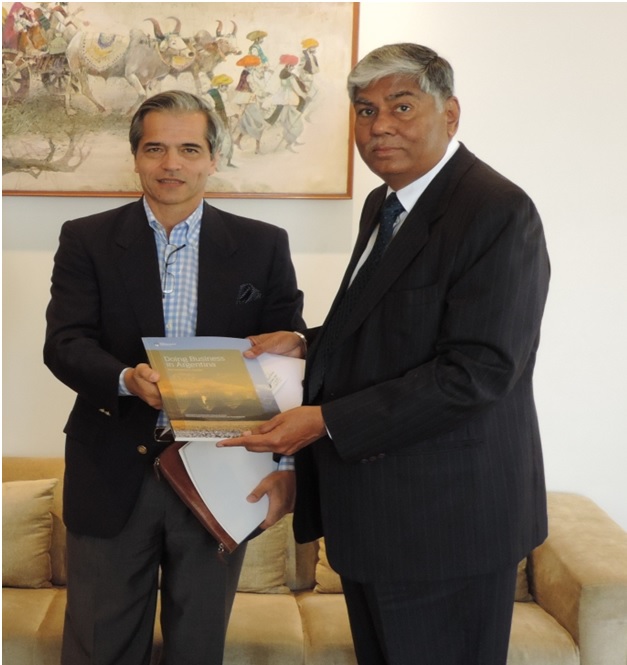