In her first open house meet with MSMEs, Dr Sonia Sethi addresses the woes of exporters

Mumbai, August 5, 2016: At a time when India’s merchandise export has started growing in June 2016 after a consecutive decline for 18 months, theAll India Association of Industries and World Trade Centre Mumbai at the WTC complex organised an open house meet with Dr Sonia Sethi, IAS, Additional Director General of Foreign Trade.

Addressing the meet, Dr Sethi reassured the micro small and medium enterprises (MSME) sector that her office is working to improve governance and transparency with a time-bound schedule of services to ensure exports pick up in the coming months. “It has been just two months that I have taken over and my team is pulling up its socks on all issues faced by industry and the potential entrants in the MSME segment. The MSME clusters are our priority in export promotion,” she told a packed audience that had braved heavy rains to listen to her and exchange their queries.

As per the Foreign Trade Policy 2015-2020, India’s exports have to jump from US$465.9 billion to US$ 900 billion by 2020 – i.e. from a share from 2% to 3.5%. The DGFT is the apex body for implementation of foreign trade policy with its four zonal and 33 regional offices. The office of additional DGFT western region caters to almost 40% of export-import related applications of India.

In recent times, Indian exporters have been facing commercial payment defaults especially from importers in Africa and some countries of Latin America owing to various factors such as falling commodity prices and currency crises in these countries. Exporters in sectors such as auto and auto components, pharmaceuticals, capital goods, electrical and electronic equipments etc are severely affected by the payment default. The Indian government is considering steps such as introduction of barter deals, opening of escrow accounts and so on to address the issue.

Office of Additional DGFT, Mumbai is now planning to sensitise all exporters to these countries about the payment risks in these regions.

Suggestions from the audience included the need for DGFT to locate the 80 million MSMEs in India and their proposed classification based on the 1,200 odd sectors. This, many felt, was needed for cluster management and would make them globally competitive.

Dr Sethi’s team made presentations on ease of applications, advance authorization norms and the crucial export promotion capital goods scheme. Exporters were informed about the common errors they make in applications and how they can rectify the same in future.

Another suggestion was that DGFT could consider more comprehensive digitisation from invoicing to drawbacks, with electronic transmission of invoice etc to the banks for issue of digital Foreign Inward Remittance Certificate (FIRC) and automatic calculation of duty drawback to avoid fraud and wrong claims. To this, officials stated that with the introduction of GST, a robust GST network is being instituted. This would evolve over time.

The DGFT now has a robust export obligation monitoring system and has been monitoring cases on a daily basis through a dynamic dashboard and claimed that there is negligible pendency in Import Export Code (IEC)/ Merchandise Export Incentive Scheme (MEIS) applications.

Dr Sethi also assured the exporters that she would soon convene a meeting of the Committee on Quality Complaints and Trade Disputes. “We have a comprehensive basket of deliverables and our effort is to facilitate and resolve difficulties faced by exporters. Large part of our systems is now online,” she explained.

The office of Additional DGFT, Mumbai, is planning two important events, one in Thane (September) and the other in Mumbai (November), for the MSME clusters in Maharashtra in 2016-17. The MSME sector focus in Thane is electrical, iron, steel and machine tools, while the Mumbai event will focus on Pharmaceuticals.

Earlier Mr Vijay Kalantri, President, AIAI and Vice Chairman, WTC Mumbai pointed out that in the changing world scenario, exporters in India must look for new markets in Africa, Latin America and the Middle East. “There is a new euphoria of growth in India and such discussions can only clear issues between the industry and the government. Dr Sethi has been always proactive and is known to take fast decisions. The AIAI and WTC Mumbai would be happy to organise such sessions in the future.” 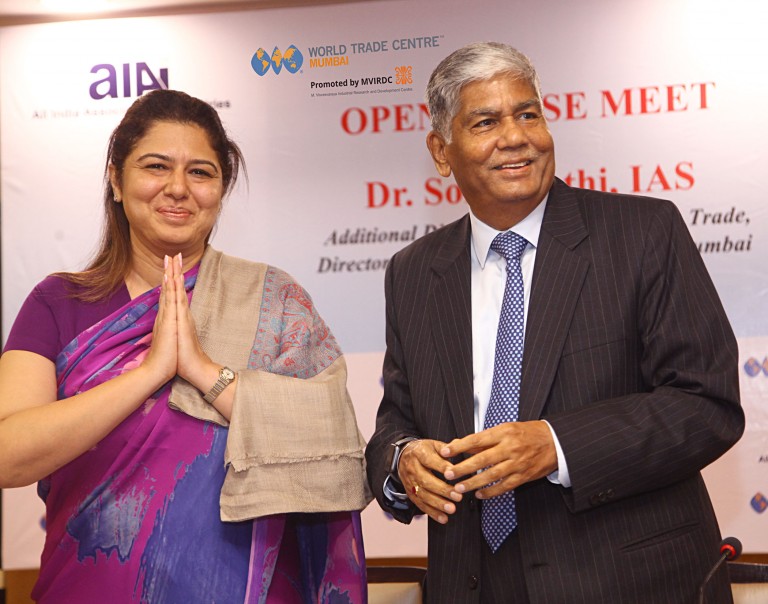