“The Delhi-Mumbai Industrial Corridor (DMIC) is major physical infrastructure project passing through six states of India. The ambitious DMIC has received major boost with India and Japan inking an agreement to set up a project development fund. The initial size of the Fund is 10 billion (US$162.0 million). Both the Japanese and Indian Governments contribute equally. The Corridor intends to develop industrial estates and townships in various parts of the country in order to give thrust to manufacturing. Also, the Indian economy is rapidly undergoing urbanization. However, urbanization and industrialization have to go hand-in-hand for progress of a nation. The DMIC will play a prominent role in converging urbanization along with industrialization. The Corridor is estimated to create 2.3 million jobs, industrial output worth Rs 20 trillion along with efficient logistical network. It is expected to reduce the transit time from 60 hours to 36 hours”, said  Mr. Bhushan Gagrani, IAS, Chief Executive Officer, Maharashtra Industrial Development Corporation during an interactive meeting on Delhi – Mumbai Industrial Corridor –  An Update on Developments in Maharashtra jointly organised by MVIRDC World Trade Centre, All India Association of Industries, Consulate General of Japan, Mumbai and The Indo-Japanese Association.

Elaborating further on the thriving importance of a corridor Mr. Gagrani said that the Indian economy has witnessed a dip in the share of manufacturing to the GDP from 16% to 15%. The Government of India intends to give a thrust to manufacturing activity in the country through its “Make in India” campaign. The DMIC will assist in the same.

It is vital to point out that industrial estates limit themselves to manufacturing activities. The task of developing an efficient transit system for transportation of goods from warehouses to markets is thrust upon the Government. The DMIC will assist in building an organised transportation system for the nation. Secondly, industrial estates do not factor in requirements such as residence, medicine and education of their workforce. The DMIC will meet these requirements of its workforce thereby developing an “industrial township” in itself, Mr. Gagrani added.

Updating the audience on the progress of the DMIC project Mr. Gagrani said the Corridor constitutes of 49% equity of DMIC Corporation (in the form of cash) and 51% equity of MIDC (in the form of land). The Government will be forming a SPV to operationalize the project. Also, the State Government lends its support in the form of tax incentives, infrastructural facilities and legislative approvals. In the state of Maharashtra the two nodes being developed on priority include the Shendra Bidkin Mega Industrial site and the Dighi region of the Raigad district.

Present on the occasion was Hon’ble Mr. Yoshimitsu Kawata, Chief Consul, Consulate-General of Japan, Mumbai. India and Japan have enjoyed cordial relations since 1952. Japan takes keen interest in the development of DMIC having spent US$ 4.5 billion on the project. Also, nearly 100 Japanese companies have invested in the Indian economy. Following the successful completion of the DMIC project many more Japanese countries intend to set up base in the nation. Also, PM Mr. Modi has had fruitful interaction with PM Mr. Abe during his recent visit to Japan. The two nations have promised to extend cooperation to each other in the arenas of politics, industry, trade and culture. The success of the DMIC project is of paramount importance to Japan. PM Mr. Abe, the Embassy of Japan in India and the Consulate of Japan will extend full cooperation towards the DMIC project, Mr. Kawata said.

Mr. Minoo Shroff, Trustee – The Indo-Japanese Association & Chairman – Economic Cooperation Council said that the Indian economy suffers from lack of adequate infrastructure and logistic facilities.  The DMIC project is expected to facilitate the same. The project is based on the foreign concept of smart cities. Although the conceptualizing of the DMIC project is good; its implementation needs to be adhered to. The successful completion of the DMIC project will transform India from a low income nation to a middle income society.

Earlier in his welcome address Mr. Vijay Kalantri, Vice Chairman, MVIRDC World Trade Centre and President, All India Association of Industries said the DMIC project was taken in the year 2007 with collaboration with Japan. The Corridor will address the lack of quality infrastructure, improve road, rail & port connectivity and recover supply side logistics for the sectors such as agriculture, engineering, textiles, automobiles, IT, etc. The DMIC project will be developing two ports in the states of Gujarat and Maharashtra respectively. The one too many benefits of the Corridor range from employment generation, attracting FDI, thrust to manufacturing and impetus to exports. In all, the Corridor is expected to make doing business in India easy and friendly. In order to fast track the development of the Corridor it is necessary to set up a task force to monitor the progress of the project and resolve its bottlenecks. 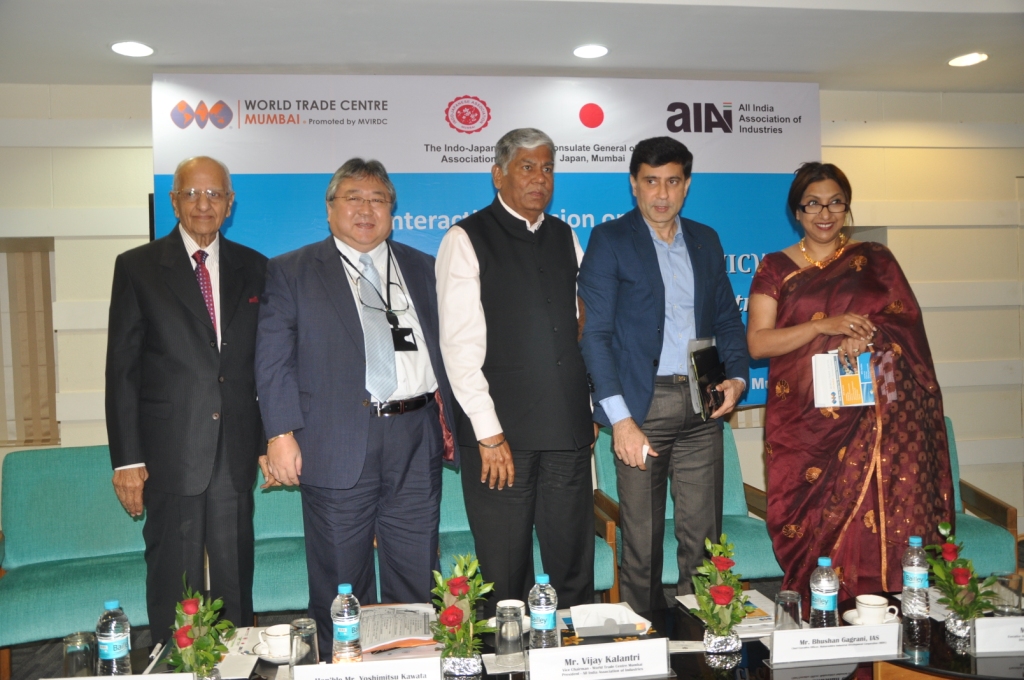