“The global economy showing signs of revival is estimated to grow at 3.7% during CY2014 from 3% in the present year. The growth is led by revival of the US and the Eurozone which may see a halt in the easy credit policy regimes followed by them. The emerging markets need to be guard against capital flight towards these developed economies triggered by arrest on monetary easing”, said Mr. D.R. Dogra, Managing Director & CEO, Credit Analysis & Research during a seminar on “Global Financial Outlook and India’s Position” organised by MVIRDC World Trade Centre and All India Association of Industries with Business Standard.

Enumerating on the far reaching impact of withdrawal of foreign investments from emerging markets Mr. Dogra said that private enterprises will lack access to easy credit facilities. The same is expected to draw a vicious circle of slowdown in domestic spending capacities, sluggish consumption demand, cost cuttings and slash in salaries. Overall, the crowding out of capital formation is expected to drag down growth prospects for emerging economies.

However, Mr. Dogra cautioned that the recovery of the developed markets is a gradual process. The withdrawal of monetary stimulus may be preliminary and may harm its growth prospects. The economies must be closely tracked for symptoms of geopolitical tensions and deflationary risks.

Elaborating on prospects for domestic capital formation in emerging markets in the wake of foreign investment withdrawal Mr. Shankar Jadhav, Head – Strategy, Bombay Stock Exchange Ltd said that the Government and SEBI should encourage investments in equity and debt markets. A slash on Security Transaction Tax may make investments in equity markets a viable option.

Further Mr. Jadhav added that SMEs are the backbone of the Indian economy. SMEs contribute to 8% of GDP, 45% of manufacturing goods, 40% of exports and nearly 10 crore employment opportunities. In the era of domestic meltdown following withdrawal of easy credit regimes globally an impetus to the SME sector will prove favorable. Thus, BSE intends to promote the SME sector and has thereby conceptualized the SME Trade Exchange. The BSE SME platform has listed 47 SME companies on its exchange while nearly 16 companies are in pipeline.

Listing of SMEs on the exchange enables an opportunity to raise equity without offering effective collateral. Also, it enables branding and marketing of the listed SMEs by broadcasting information in the press and websites. The SMEs attain guidance from merchant bankers on creation of liquidity with a 2-way bid price thereby enabling access to market funds. Also, the SMEs are under the effective vigilance of the regulators signaling effective governance, Mr Jadhav said.

Present on the occasion was Mr. Jairaj Purandare, Chairman, JMP Advisors Pvt Ltd. Commenting on the overtly optimistic growth prospects for the global economy and fears of capital flight Mr. Purandare said that the last few months have demonstrated the preparedness of the Indian Government and the RBI in dealing with capital flight. The fluctuating Indian Rupee has been stable in comparison to other emerging market currencies. However, the future scenario for the Indian economy depends on the emergence of political stability, control of inflationary pressures and generating business confidence.

Elaborating further on the recent macroeconomic projections for India Mr. Purandare noted that the Interim Budget has met the fiscal deficit targets. However, the hopes of tax revenues registering 18% growth in the coming financial year may fall short of expectations. The rollover of oil subsidies, dividends on mutual funds and cut in planned expenditure for the next year may

prove disastrous for the economy. The need of the hour is to proceed with GST, DTC and better tax administration reforms, Mr. Purandare noted.

Deliberating on the various provisions for increasing tax revenues Mr. Purandare said that the activation of GST may add 1.5% to 2% of GDP growth and set an ideal example of good governance. However, issues such revenue sharing agreement amongst the Central Government and the State Government and efficient IT requirement in tax collection have hampered the commencement of GST until April, 2015. As for the DTC, the Government needs to do away with provisions such as GAAR. By and large, tax administration reforms by the Government need to simplified and rationalized for the general public.

Earlier, in his welcome remarks Mr. Vijay Kalantri, Vice-Chairman, MVIRDC World Trade Centre and All India Association of Industries said that the economic activity has demonstrated gradual recovery in the US and the European markets. The same accompanied by structural and political issues in India may prove fatal for its growth prospects. Transparent policies, political stability, impetus to infrastructural sector and investment proposals, curbs on inflationary pressures and a stable currency will improve prospects for the economy in the near future. The same will serve vital in making India an attractive foreign investments destination, Mr. Kalantri advised. 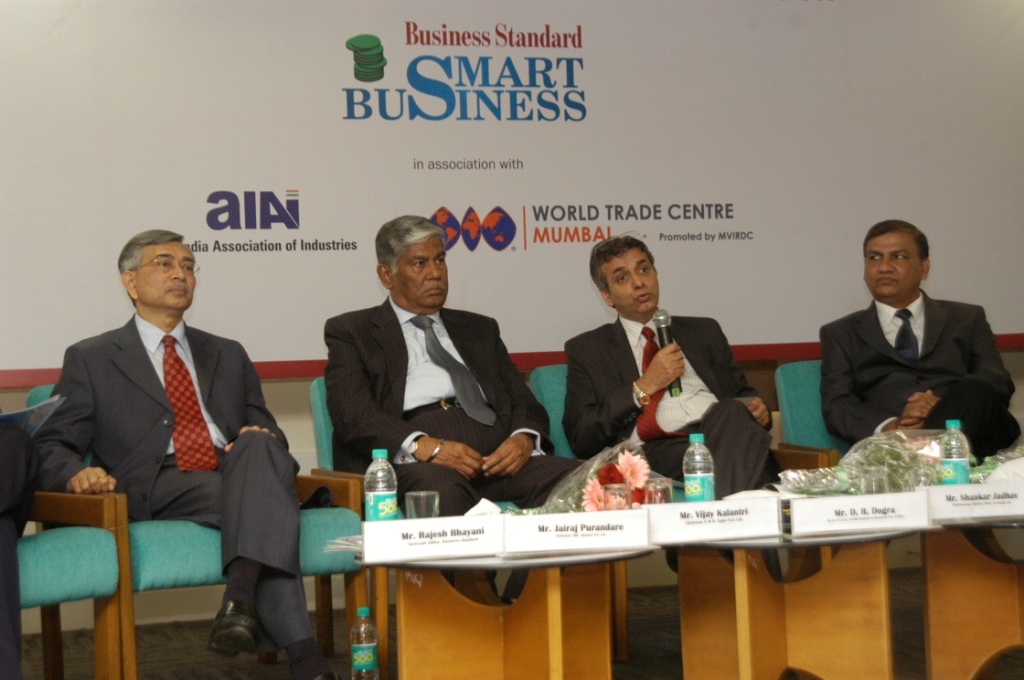