We are here in India to explore the trends and opportunities for investments since the various schemes and programmes announced by the Indian government specially in the sectors like steel, logistics, automotive, Information Technology, communication, financial services and others areas of interest said H.E. Mr. Etienne Schneider, Deputy Prime Minister and Minister of Economy, Grand Duchy of Luxembourg at a meeting with All India Association of Industries (AIAI) and World Trade Centre Mumbai. Mr. Schneider, was accompanied by a 35 member high level delegation from Luxembourg.

Mr. Schneider said today the bilateral trade between Indian & Luxembourg is hardly US$. 51 million and should be double in next 3years, as Luxembourg is growing at 5.2% and has a control on inflation and attracts second largest investments in Europe.

Mr. Schneider said, “We have very good infrastructure and we are able to supply auto and auto components in the European region to various countries in Europe due to uninterrupted good logistics network of about 400 kilometer. We are well connected with the European ports such as Antwerp, Rotterdam and Amsterdam, which makes us important continent in the region for doing business.”

Mr.  Schneider said “We are one of the leaders in financial services and are looking at investment in India and that is one of the main objective for visiting India. We are here to explore possibilities of investment, joint ventures and technology transfer in various sectors.” He further expressed that they had very excellent meetings in Delhi with the Ministry of Finance, Ministry of Industry and Commerce, Ministry of Railway and others.

Speaking on this occasion, Mr. Vijay Kalantri, President, All India Association of Industries and Vice Chairman, Word Trade Centre Mumbai,   pointed out that this is the most opportune time for foreign companies to invest in India as the domestic economy is growing at a strong pace, the government is improving the ease of doing business in the country and welcoming foreign investment in the manufacturing sector through ‘Make in India’ programme. The Indian government is also developing logistics and supply chain infrastructure in the country through the implementation of mega projects like the Delhi-Mumbai Industrial corridor. Considering that Luxembourg has some of the worlds-renowned steel companies and logistics companies, they can benefit by investing in India’s infrastructure projects. Mr. Kalantri suggested companies from Luxembourg should invest in India now by taking advantage of the stabilized commercial real estate prices in the country and the governments Make in India projects. 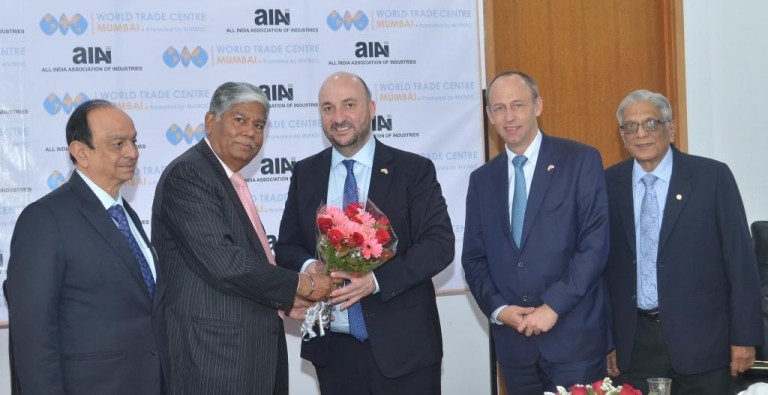