“The Union Budget 2015-16 aims to reduce litigation on tax matters through various measures like introducing Dispute Resolution Bill, raising the threshold limit for the applicability of domestic transfer pricing laws and defining the word ‘substantial’ in the case of indirect transfers. Also, the Budget has other progressive features like legislative framework for black money, huge investment for infrastructure, abolition of wealth tax, reduction of royalty fees and various tax benefits for individual assesses to promote savings”, said Mr. Firoze A. Andhyarujina, Senior Advocate, High Court Mumbaiin his opening remarks as the moderator of the meeting on ‘Implications of the Budget 2015-16’ jointly organized by All India Association of Industries and MVIRDC World Trade Centre.

Raising concern about the magnitude of tax litigation in India, Mr. Andhyarujina mentioned that currently 3 lakh cases are pending in the High Court with the government being the largest litigator. Alarmingly, the government has lost 72 per cent of the cases in the High Court. More importantly, Rs. 4,36,000 crore is locked on tax litigation. In this context, the Budget has made an attempt to simplify tax laws while making it transparent and eliminating ambiguity, he said.

However, Nishith Desai, Founder, Nishith Desai Associates critically viewed the budget by saying that some of its provisions could raise the number of tax litigations. Specifically, he said the amendment to the definition of ‘place of effective management’ (POEM) may give more discretion to tax officers as the new definition is ambiguous. This may lead to increasing litigations on tax residency of establishments. He was also critical of the government’s move to levy 10 per cent withholding tax on the income of Alternative Investment Funds (AIFs) based out of India, a step which he termed as intellectual dishonesty.

Further, he remarked that the Budget should be more transparent by disclosing the amount of deposits held by the income tax department against pending tax litigations. He termed this amount of deposits as hidden liability of the Government of India since it needs to be refunded with interest to the assesses in case the government loses the case. He also called for proportionality in the penalty for tax offences. He concluded that the government must improve drafting of laws to bring about clarity and certainty.

Mr. Dadi B. Engineer, Senior Partner, Crawford Bayley & Co. feels that the indirect tax proposals in the Budget will give rise to inflationary pressure in the economy. Specifically, the hike in excise duties, service tax and the 2 per cent cess (Swacch Bharat) on certain services may raise inflation.

Mr. Jairaj Purandare, Founder Chairman, JMP Advisors Pvt Ltd, remarked that the Budget was a growth oriented one, balancing various objectives like fiscal discipline and inclusive growth. While agreeing with Mr. Engineer on the inflationary consequences of the Budget, Mr. Purnadare said that the new agreement between the government and the RBI on inflation targeting framework would address this issue.

He also agreed that the change in definition of ‘POEM’ could lead to rise in litigation and therefore he hoped clarification from the government on this matter. Mr. Purandare listed out budgetary proposals related to the development of the financial sector namely, setting up of a Bank Board Bureau, allocation for recapitalization of PSU Banks, gold monetization scheme, rationalization of MAT for FIIs etc.

Mr. Deepak Agarwal, Senior Manager, Deloitte Touche Tohmatsu India Pvt Ltd touched upon some of the indirect tax proposals and concluded that some of the provisions in the Budget were favourable for assesses. Specifically, the extension of time limit for CENVAT credit and rationalization of penalty provision in indirect taxes are favourable for assesses, he pointed out.

Earlier in his welcome address, Mr. Vijay Kalantri, President, All India Association of Industries and Vice Chairman, MVIRDC World Trade Centre said that the Railway and Union Budgets had the vision to boost the manufacturing sector and the ‘Make in India’ initiative, which will give rise to inflationary growth. The progressive features in the Budget along with RBI’s reduction in policy rate by 25 basis points would enhance growth prospects in the economy. The steady decline in inflation and the poor growth in the 8 core infrastructure sectors (for the month of January) prompted RBI to reduce the policy rate. 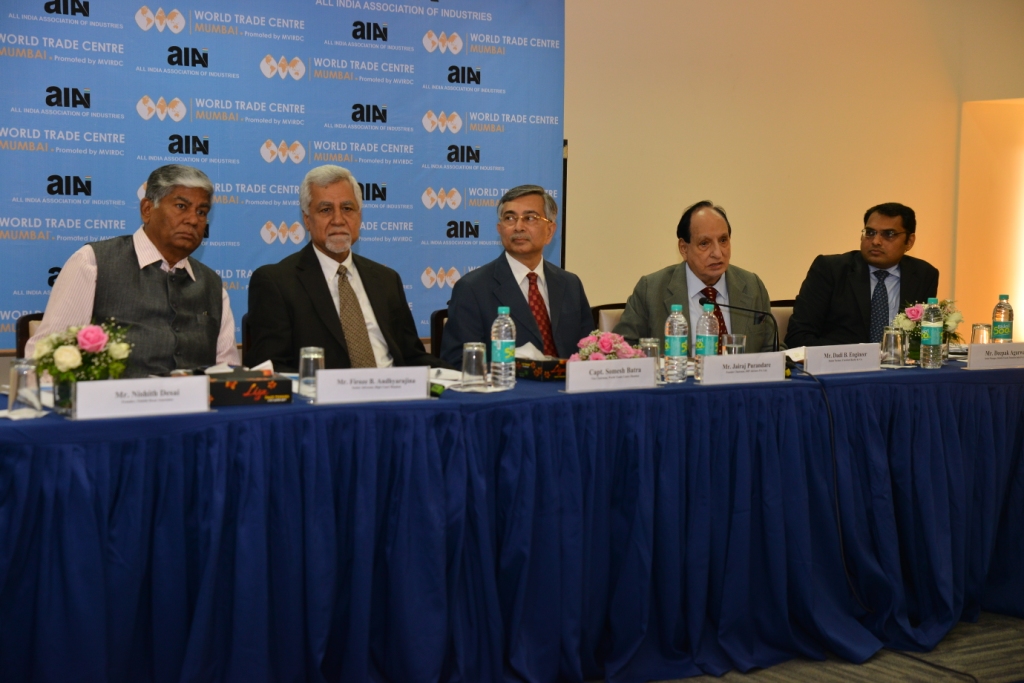