Free and Fair Pricing for All through CPI recommends Mr. Kalantri
Press Release
by aiai-india

Free and Fair Pricing for All through CPI recommends Mr. Kalantri

“The Consumer Price Index has a well calibrated scientific approach towards estimating the inflation index. The parameters considered under the CPI are well framed with intensive work by the Labour Bureau of the Government of India. However, despite efforts on the part of the Government and the RBI, industrial labourer’s bear the brunt of rising inflationary pressures in the economy. The need of the hour is to identify the roadblocks in arresting the price rise”, said Mr. Vijay Kalantri, Guest of Honour at the Index Users’ Conference on Consumer Price Index organized by the Labour Bureau, Government of India in association with the Labour Commissioner, Government of Maharashtra.

As the Indian economy transforms itself from an emerging economy to an advanced nation, “inclusive growth” is the primary agenda for the Government.  The term “inclusive growth” means meeting the interests of the common man represented by industrial workers. It can be achieved through “Free and Fair Pricing for all”, Mr. Kalantri noted.

Suggesting recommendations towards a consumer inclusive price index, Mr. Kalantri said it is vital to break the huge value chain of middle man between the goods and customers. An efficient public distribution system will aid the same. Despite the passage of the food security bill, only an efficient public distribution system can ensure trickle down of benefits of the food security bill to the end consumer, Mr. Kalantri clarified.

Mr. Kalantri recommended establishing workers stores in their townships and colonies on the similar lines of military owned stores. The stores may be managed by the Government but run by the workers thereby enabling collective bargaining and fair prices for all. It shall set a good example of self regulation and administration.

Further, Mr. Kalantri called upon narrowing the difference between the WPI & CPI as effective price indices for the economy.

Earlier, in his welcome remarks Mr. H.K. Jawale, Labour Commissioner said the CPI-IW is a flagship activity of Labour Bureau of Government of India. The index initiated globally in 1921 was adopted by the Indian government in the year 1949.The multiple uses of the CPI-IW are the determination of dearness allowance, formulation of policy on wages, price, taxes, computation of real wages and price adjustments in business, individual and contracts. The steps in the price collection include selection of markets, shops, products and their varieties. The price collector’s, price supervisor’s and state coordinator’s are appointed by Labour Bureau for CPI compilation. The various agencies involved in the dissemination of CPI include the Labour Bureau, Ministry of Labour Bureau and Employment, N.S.S.O, Ministry of MOSPI, trade unions, state and union territories.

Mr. Daljeet Singh, I.E.S, Director General, Ministry of Labour and Employment, Government of India said the Labour Bureau proposes updating the CPI with a new series. The proposed series will increase the number of centers covered from 77 to 88 and coverage of state and union territories will be hiked from 22 to 27. The agenda for today’s Index Users’ meet is to create awareness amongst different stake holders about the base updation exercise and initiating corporation from the State Government, Central Government, trade unions and Employee organizations towards the same. The new series of CPI-IW includes a compressed time frame, formalized consultations with stakeholders and increased coverage of sectors, centers, states and union territories. 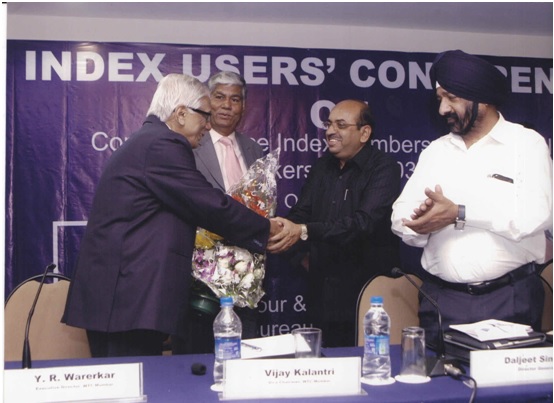