Houston can be the gateway to the Americas for Indians

Houston can be the gateway to the Americas for Indians

The Mayor of Houston, Annise D. Parker expressed her pleasure for starting her foreign trip from Mumbai. She drew parallels between the two cities and said, “We have four common reasons for doing business with Mumbai. Geographically, economically, both are business capitals and are international cities, I am glad to have started my journey from Mumbai.” Drawing more comparisons, she added, “Houston is the fourth largest in US, while Mumbai is the fourth largest in the world.” Mayor Parker also appreciated the view she got of this city, which is otherwise not easily seen by all. “I am glad to have viewed Mumbai city from top of the World Trade Centre building, which gives a perspective of why this city is financially very powerful.” Annise D. Parker the Mayor of Houston, State of Texas, USA spoke at an interactive session on “Houston: Your Gateway to the America,” on April 20, at the World Trade Centre, Mumbai. She was accompanied by a high-level business delegation.

Parker emphasized that over 700 firms from Houston have joint businesses with India. Parker elaborated the city of Houston which she said was a reintroduction as many Indians have personal and business relations with her city. “Houston is the fastest manufacturing city of US and is the oil capital of America and arguably of the oil capital of the world,” said Parker. The other sectors in which Houston leads are Solar energy, wind power, bio fuels, medical facilities, Pharma and American space programme. She emphasized the need for commericalising certain services in her city. “We need to commercialise medical and space industries to make them more thriving. ”The advantage that Houston has over other regions, is the diversity and specifically all Indian languages are seen to be spoken in that area.

Parker highlighted the fact that the “Economic regulatory climate in Houston is enhancing the trade relations between various regions and countries.”

Jagdeep Ahluwalia, Executive Director of the Indo-American Chamber of Commerce of Greater Houston invited trade delegations from India to enhance the export and trade between the two countries. He lay emphasis on the need for commercializing intellectual industries like Space programmes at NASA and medical facilities.

Bob Pertierra, the chief economic officer, Greater Houston Partnership and World Trade Centre Houston said that the trade between Indian and Houston has grown four times over a period of time.  He mentioned the top Indian industries that have invested in Houston and helped in increase of the trade between the two countries. “We have seen trade of $ 1.76 billion. And we are happy to say that TCS, Reliance, ESSAR, Larsen & Toubro and GAIL are the companies doing business in Houston,” said Pertierra. He welcomed Indian investors to further strengthen this economic relationship.

Prior to the speeches of the visiting delegation, Deanna Abdeen, the Deputy Principal Officer, Consulate General of the United States in Mumbai termed the relationship between the two countries as a ‘defining’ one, especially after Prime Minister Narendra Modi’s visit to US. She appreciated the concept of “Chaley saath saath: we believe in working together towards facilitating better trade relations,” said Abdeen. She also said that the bilateral trade relations between India and Houston is at $100 million which will become five fold in the next few years.” India is currently the sixth highest Asian trading partner with Houston.

Abdeen specifically emphasized the importance of working together in security developments and benefit of both countries, in context with the World Trade Organisation (WTO). “If India and US are more secure we can create a healthy working environment not only between the two countries, but will have profound impact on the rest of the world,” stated Abdeen.

Earlier, Vijay Kalantri, the President of AIAI and Vice-Chairman of WTC Mumbai gave the welcome address “Our trade with US is 60 billion, there is more potential and the good part is the US is the biggest investor. Now with ‘Make in India’ and other efforts, we will strive to increase this relationship. We need their technological and investments which help our economy grow at 8-12%.” Kalantri added, “The new shale technology for gas exploration will be helpful for us.” 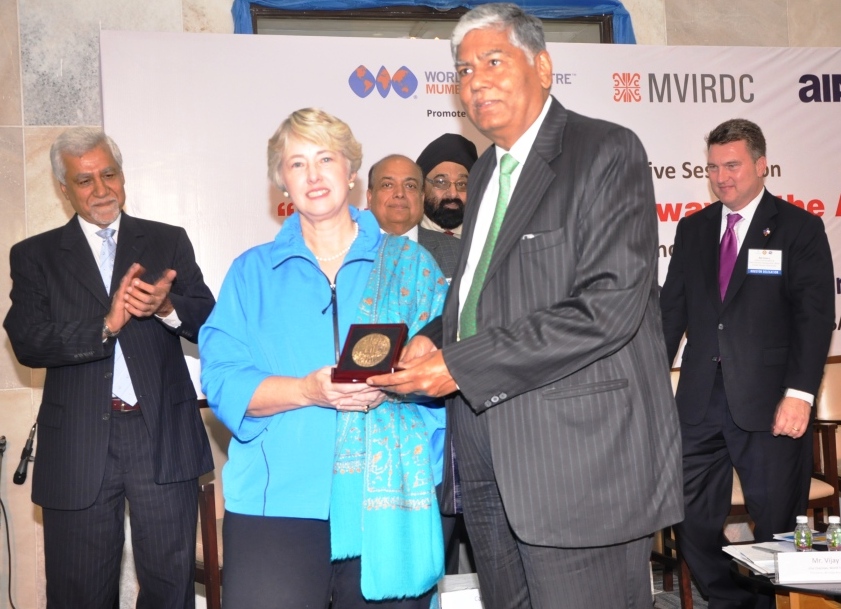