I could not have become a mayor without support from Indian community, says Mayor Turner
Press Release
by aiai-india

I could not have become a mayor without support from Indian community, says Mayor Turner

“This is the perfect time to strengthen India’s partnership with the City of Houston, which is the Energy Capital of the World and which has the world’s largest healthcare centre. This is my first visit to India and I promise to visit the country again. The main purpose of my visit is to develop win-win partnership with the India. We are here to build relationship and we do not believe in building divisive walls. Houston is the most diverse and inclusive city in America. Around 25% of Houstonians are of foreign origin. Houston is home to around 82,000 persons of Indian origin. I could not have become a mayor without the strong support of the Indian community in Houston. There is tremendous scope for developing cultural and student exchange programmes. Houston has world class science and technology institutions, including NASA Space Center. There exist diverse areas to build synergies between both the countries,” said Hon’ble Sylvester Turner, Mayor of Houston, State of Texas, USA at an Interactive meeting organised by MVIRDC World Trade Centre Mumbai and All India Association of Industries (AIAI).

The Hon’ble Mayor led a high level business delegation of around 40 members representing a diverse range of sectors such as hospitality, space research, aviation, healthcare, legal consultancy, education, transportation and infrastructure, retail, engineering and construction, technology start-ups ports etc. Dr. Turner added that all the delegates are looking forward to promote bilateral Trade and strengthen relationship between the Economic Capital of India and Houston

Speaking on this occasion, Mr. D.R. Parmar, Deputy Commissioner of Industries, Government of Gujarat invited the members of the delegation to the9th edition of Vibrant Gujarat Summit on the theme ‘Shaping a New India’, which is scheduled from 18-20th January 2019. The Summit will be organised in partnership with 30 countries and key highlights of the Summit are sectoral sessions, vendor development programmes, MSME Convention Centre, Special Session on Africa and West Asia. The 9th edition of Vibrant Gujarat will witness participation from more than 20,000 companies and 10,000 exporters across the globe.

Earlier in his welcome remarks, Mr. Vijay Kalantri, President, All India Association of Industries and Vice Chairman, MVIRDC World Trade Centre Mumbai said, “Houston is the energy capital of the world. But the city has other competitive advantages beyond energy. Houston is the world renowned Port City with excellent cargo handling infrastructure. Government of Maharashtra is also laying emphasis on building world-class infrastructure. There is tremendous potential for India to collaborate with Houston in ports, logistics, infrastructure, energy, healthcare and other sectors. Mumbai is the economic and commercial capital of India.Today, bilateral trade between Houston and India stands at USD 4.9 billion, which I expect to grow three times in the next five years.”

During the event, the Indo-American Chamber of Commerce of Greater Houston signed two memoranda of understanding (MoU), one each with All India Association of Industries (AIAI) and MVIRDC World Trade Centre Mumbai.

The event was attended by over 300 representatives from trade and industry, government officials, consular corps, chambers of commerce, think tanks and academic institutions and also had B2B Meetings. 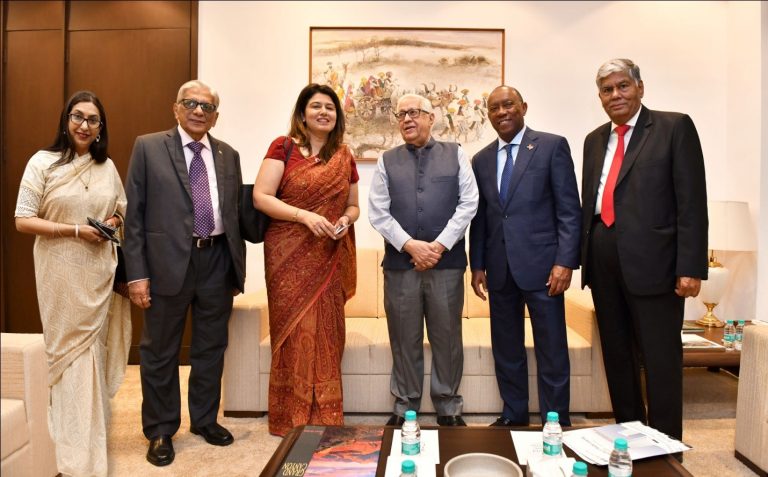