“Over the years, we have diversified export destinations and basket. From 45% share of US and EU in the year 2000, it has now come down to 30%. The share of emerging markets is 50% today. But quick, short-term fixes are not helping much. We need to create an export culture, address fundamental issues like shortages of transport network, logistics, energy, bring down transportation costs, improve ease of doing business and constantly review our FTAs”, said Dr. Rupa Rege Nitsure, Group Chief Economist, L&T Finance Holdings at the Panel Discussion on ‘How to Revive Stagnant Exports’. The discussion was organized by World Trade Centre Mumbai & All India Association of Industries in association with Business Standard at World Trade Centre, Mumbai.

Dr. Rege said “Export deceleration has been significant in the past five years. Both traditional and non-traditional exports have weakened. Traditional export growth has reduced from 14% in the decade ending FY12 to 0.4% in the current year, while non-traditional export growth has come down from 21.5% to 4.7%. When export deceleration is accompanied with worsening of trade balance and high Current Account Deficit, we go for liberalizing FDI in debt, costly NRI deposits or sovereign bonds. To promote exports, we come out with sops, subsidies, interest subvention etc. But these do not help to revive exports on a sustainable basis”.

Suggesting that a lot could be learnt from China, Dr. Rege iterated that China created SEZs, formulated different laws of business for districts located next to the coasts, made huge investments in labour-intensive sectors and skill development, promoted new cities and invested in urbanization, and used its ties with non residents in Hong Kong and Taiwan to get skilled labour force, FDI and entrepreneurs. India should emulate such measures for reviving its stagnant exports.

Sharing his views, Mr. Mangesh Soman, Joint President (Corporate Economics Cell), Aditya Birla Group, remarked “Although overall merchandise exports have stagnated, there are two numbers that have grown in recent years – the share of MSMEs in India’s exports have increased from 42% in FY14 to 50% in FY16, and the amount of export incentives under the Merchandise Exports from India Schemes, has expanded to around 8000 tariff lines, covering nearly three-fourth of the product lines. Suggesting that export–intensive manufacturing operations which include labour-intensive sectors like apparel, leather and gems and jewellery, as also auto components and engineering seek to be long-term, steady players in the export market, he added “Nearly two-third of the global trade is through participation in Global Value Chains which requires adherence to strict quality norms, timely supplies and continued productivity growth. It is also necessary to keep moving up the value chain”.

Proposing measures to revive exports, Mr. Soman said “As the export incentives are phased out, we would need to look at export promotion in terms of promoting competitiveness and participation in value chains. Some of the policy actions, from a long-term of viewpoint include facilitating scale-up through labour reforms, easier land acquisition at coastal economic zones, encouraging skill development through partnerships between government’s export promotion agencies and industry bodies and  technology upgradation schemes for more sectors.”

He concluded his remarks saying “India should be more tolerant of a moderately undervalued currency. While this cannot be an officially stated objective and cannot be ensured at all times, given the other macroeconomic considerations and objectives, still, to the extent possible, the extent of intervention can be skewed towards maintaining the rupee at a more competitive level.”

Addressing the gathering, Mr. Keyur Parekh, Vice President, Welspun Global Brands Limited, said “Textile plays a major role in the Indian economy, as it contributes 14% to the industrial production and 4% to GDP. With over 45 million people, the industry is one of the largest employment generators, and is one of the largest contributors to India’s exports, contributing about 13% to total exports. Under the impact of GST roll out, textile and garment exports have missed the USD 45 billion target for 2017-18 (only close to USD 40 billion was achieved) and has resulted in tariff advantages being enjoyed by competitors like Bangladesh and Vietnam”.

Offering measures to revive exports, Mr. Parekh said “We need to focus on ‘Ease of Doing Exports’. India needs a single platform like a Green Channel as we compete with emerging markets. Effective exchange rate management would be critical to achieve a significant increase in exports from India. The government should encourage setting up of more integrated textile units to increase productivity and efficiency, ensure a level-playing field with country peers competing in EU/UK markets, sign free trade pacts with major markets like the EU, US, Canada and Britain to equalise market access positions with key competitors and iron out all the glitches arising out of GST implementation. Indian players need to gear themselves with the changing landscape & its requirements such as e-commerce, millennials, etc.”.

Mr. Prahalathan Iyer, Chief General Manager, Research & Analysis Group, EXIM Bank opined that “During the global financial crisis, there was an estimated decline of 20% in trade due to non-availability of trade finance. Following the global financial crisis, there has been greater selectivity in risk taking, and flight to quality customers in trade finance markets. There has been increase in difficulties faced by low income countries to access the trade finance on affordable terms. There are structural difficulties in developing countries – ranging from lack of know-how in local banks, mistrust, large collateral requirements and high fees for loans. These challenges were present even before 2008, bust have now aggravated.”

Mr. Iyer added “ADB has estimated in its survey that the unmet global demand for trade finance could be as high as USD 2 trillion. In Asian developing economies alone, the estimated shortage could be as high as USD 1 trillion. With the introduction of risk-based capital standards by BASEL, the role played by credit rating agencies and their country risk models have high influence on the financial markets. It is estimated that BASEL III regulations would make the trade finance costlier to the tune of 15% – 37%, which in turn could take down the trade finance capacity by as much as 6%”.

In his remarks, Mr. Krishanlal Dhingra, Regional Chairman (WR), EEPC India said “GST implementation has not been smooth. It is being streamlined now and the issues faced will settle soon. We need to exempt taxes on production of exports and impose anti-dumping and safeguard measures. The government has a scheme of reimbursing 50% of the expenses incurred by businesses fighting anti-dumping cases, with a maximum of Rs. 2 crores. We are recommending the government to raise it to 75 per cent.  Further, we need a shipping regulator like telecom and insurance regulators to remove malpractices in the industry”.

Earlier, in his Welcome Address, Mr. Vijay Kalantri, Vice Chairman – MVIRDC, World Trade Centre Mumbai and President – All India Association of Industries, remarked “Trade infrastructure should be upgraded to meet international standards as this will facilitate exports from India and also make MSMEs competitive in the global markets. Depreciation of rupee may not be an answer to revive exports. We should also try to promote import substitution to strengthen MSMEs’ productivity, innovation and competitiveness. There is a need to lay thrust on improving infrastructure, boost the manufacturing sector and reduce transaction costs to revive our stagnant exports”. 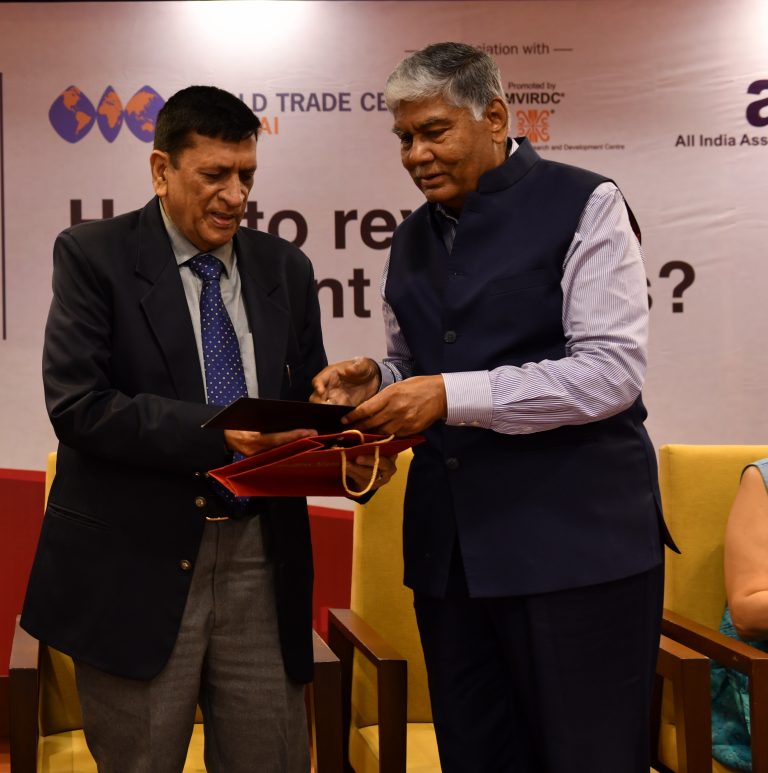