Vu Son Thuy, Consul General, Socialist Republic of Vietnam suggested Indian companies to capitalize on the tremendous business opportunities in the Vietnamese economy which is on the cusp of a remarkable transformation owing to its participation in the ongoing talks on Trans-Pacific Partnership (TPP) agreement. This proposed agreement, in conjunction with Vietnam’s second phase of structural reforms or ‘Renovation Two’, would make that economy an attractive destination for Indian enterprises seeking business collaborations. It may be recalled that ‘Renovation One’ had taken place in 1986 said Thuy at an interactive meeting held on ’New Opportunities for Indian Enterprises created by Trans-Pacific Partnership in Vietnam’ organized by MVIRDC World Trade Centre and All India Association of Industries on April 10, 2015.

TPP is a US-Led initiative on trade and investment agreement in the Pacific region with a deliberate effort to keep China out of it. The twelve countries involved in this negotiation are Australia, Brunei, Canada, Chile, Japan, Malaysia, Mexico, New Zealand, Peru, Singapore, USA and Vietnam.

“The challenge for Vietnam from TPP is that the agreement would require all the production processes to be inside TPP countries. However at present, Vietnam imports 70% of raw material for textile from China. Once the TPP is signed, it would open huge export market for India’s (potential future member of TPP) garment raw material producers”, he urged.

He said the two main benefits for Vietnam from the proposed TPP would be low or zero tariff regime and absence of competition from China. TPP would open the entire US market for Vietnamese exporters as it would do away with 11,000 types of taxes and reduce the current tariff levels of 12%, 17% and 65% to 5% or 0%. Most importantly, the TPP would raise GDP of the Vietnam economy by 25% and export by 35%, he said.

Listing out the incentives given to Indian companies for investment in Vietnam, Thuy said the government provides tax holidays, import duty exemption, concession on land lease charges, electricity, among other things for Indian investors.

“The Vietnamese government is introducing progressive reforms which include easing the procedures for doing business, reducing the government holding of state-owned companies, relaxing the FDI norms on key sectors like real estate, reforming corporate law etc under the “Renovation Two programme”, Thuy said.

He pointed out that the East-West Economic Corridor, which is a land route connecting eastern part of India, Myanmar, Northern part of Thailand and Vietnam, could be used by Indian companies to import and export goods to East Asian countries. Using this road route would reduce the time taken for shipment by half compared to the traditional sea route, and this is the shortest route to access TPP countries, Thuy said.

Further, Thuy introduced the two important cities of Vietnam which Indian companies should consider setting up their base namely, Da Nang City and Guang Binh Province. While the former has world-class infrastructure to include wifi, the latter is a potential manufacturing hub for Indian companies.

Earlier in his welcome address Vijay Kalantri, Vice Chairman, MVIRDC World Trade Centre and President, All India Association of Industries raised hope that this event would set the stage for considerable growth in the bilateral trade between both the countries.

Noting that Vietnam is a high-growth economy among ASEAN countries and that its goods in sectors like textiles are exported to many countries of the world, Kalantri said India would gain immensely by having strong ties with the country. He stressed on the tremendous business opportunities in Vietnam. Indo-Vietnam bilateral trade is rapidly growing and is likely to reach $ 15 billion by 2020. He urged Vietnam companies to invest in India as there is great potential in sectors such as textiles, footwear, tourism etc. 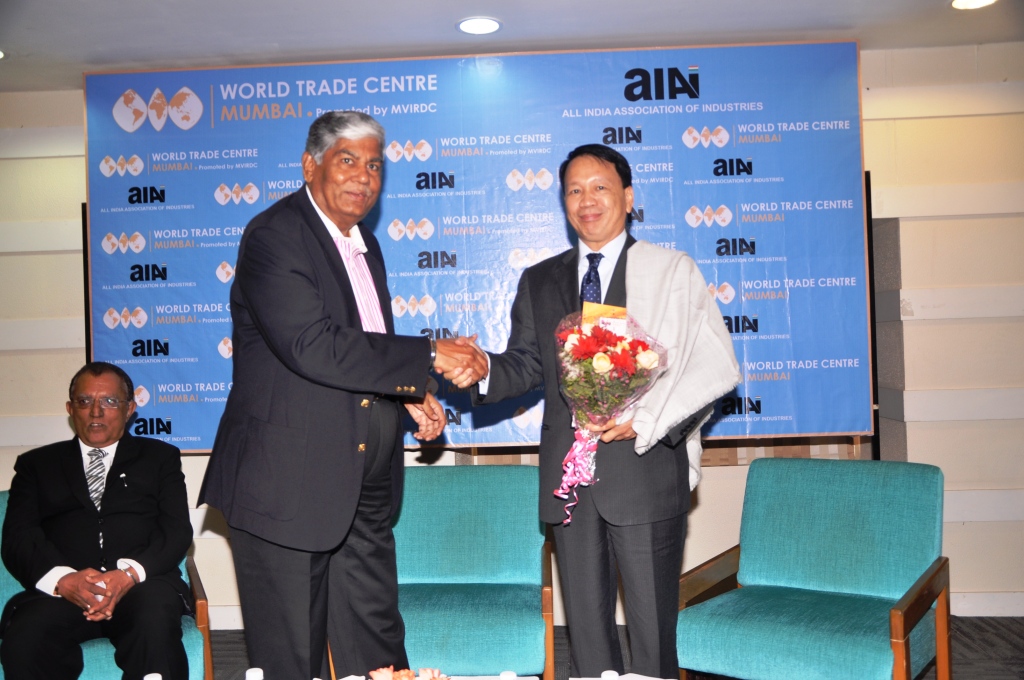