The book `Innovation Sutra’, based on the teachings of the Buddha, is about instant transformation serving as a guide to work-life balance. Just as a drop of water gets transformed when touched by a ray of sunlight or seed, given the right proportion of nutrients, transforms into a full grown plant further giving birth to numerous forests, so also a parent sends his son to the corporate world hoping that he transforms into a dutiful and responsible adult,  said Mrs. Rekha Shetty, Managing Director, Farstar Distribution Network Ltd and renowned innovation expert, at the launch of her 8th book titled ‘Innovation Sutra’, which was jointly organised by and All India Association of Industries and MVIRDC World Trade Centre.

An ardent believer in the `Buddha as the CEO’, she said that every person innately possessed the very nature of Buddha. Everyone should aspire in doing things that would make the people around feel happy. Whatever one does affects the other. It only takes a single person to bring about change.

Speaking about the Book she said, the book was aimed at the 30s age group, where a person entering the workforce should not look at grabbing, amassing, cheating and indulgence in fraudulent behaviour, but seek out the larger good for everyone directly or indirectly related to one’s work. One should be professionally skilled, efficient, learned and above all be honest, while aiming for excellence in a chosen field. Keep company with good people, do not take away what is legitimately earned by another. Work environment should be participative and not dictatorial, she added.

While drawing a parallel from `Innovation Sutra’, Mrs. Shetty said that the protagonist `Dharam’, an immensely successful banker in Manhattan, USA, using wrong means to create wealth, meets Kunal who too is in a profession of selling fake Indian antiques to American. They both decide to flee as sooner or later they would be jailed. They undertake a journey along the Buddhist pilgrim trail—from Lumbini, Kapilavastu and Bodh Gaya to Sarnath, Rajgir, Nalanda, Vaishali, Kaushambi and Kushinagar. As they journey through these places, Dharam is inspired by Buddha’s teachings, finding a new purpose to his business life, developing the idea for an ethical yet profitable business—`The Buddhist Footprint’. Likewise every person can seek out a good transparent work culture bereft of misguidance, cheat and misrepresentation if they desire to do so, if they truly followed the Buddha’s word.  Buddha’s approach to management comprises 3 emotions namely, loving kindness or metta, compassion or karuna and equanimity or upekkha.

She advocated practising Dharma in everyday living. Principles of innovation lie in a gift-based economy. Maximum good comes from giving rather than taking. Every chapter in the book deals with a `Sutra’ or `Rule of functioning’. The final chapter in the book explains how Dharam goes back to the Buddhist Footprint and inspired by the teachings intends to sell of his assets and pay off debts which he held onto. By doing so he was making people happy which in turn had a positive effect on himself giving rise to others to emulate his behaviour. In this way he was able to implement Buddhist principles in business.

Earlier in his welcome address, Mr. Vijay Kalantri, Vice Chairman and President, All India Association of Industries said, Mrs Shetty is a prolific, innovative writer and always had something thrilling, inspiring and articulate to say in her books. He stressed on the need of a good entrepreneur, which is possible, if one innovated and to innovate one should take risks. Value systems were falling and the world was moving towards being materialistic. He said that even if everyone was to follow just 10 per cent of what Mrs Shetty conveyed through her book, the world would be a better place to live in. 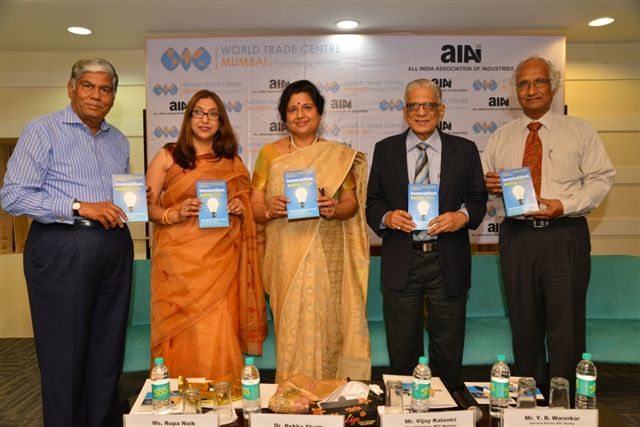