“Maharashtra is a premier industrial state and commercial & economic capital of India. It offers tremendous investment and trade opportunities to one and all. Maharashtra offers a land of opportunities where the business communities from India and Pakistan could collaborate and work together”, said Mr. J. S. Saharia, Chief Secretary, Government of Maharashtra during a meeting with Ms. Rukhsana Shah, Secretary, Ministry of Textiles, Government of Pakistan organised by MVIRDC World Trade Centre and All India Association of Industries.

Elaborating on the openness in trade and business demonstrated by the state, Mr. Saharia said that Maharashtra welcomes delegations from across the globe which is an established fact considering the presence of representatives from various countries in the state. We invite the business community of Pakistan to Maharashtra as well, Mr. Saharia added.

In response Ms. Rukhsana Shah, Secretary, Ministry of Textiles, Government of Pakistan said coming to Mumbai is like home coming. The city is developing fast day by day. One really feels that you are in the economic and commercial capital of the country where people are truly business like and hospitable.

Further, Ms. Shah praised the Government of Maharashtra, the police and the administration for the smooth functioning of “Made in Pakistan Expo” being held for the third time in the city.  Ms Shah was very happy with the infrastructure created to hold this prestigious exhibition. The response received by the “Made in Pakistan Expo 2014” has been warm and welcoming, Ms. Shah added.

Commenting on mutual complementarities between the nations Ms. Shah said that we at Pakistan are intrigued by India art silk, silk yarn and fiber and look forward to importing the same. 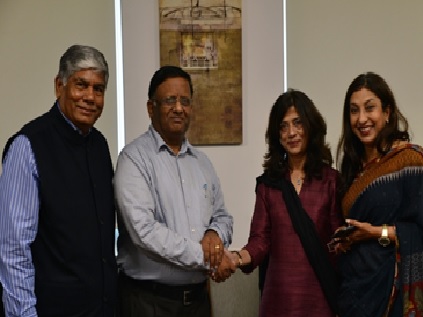