By introduction of Goods & Service Tax (GST), Government really means in “Ease of Doing Business”. Introduction of this one tax will lure the foreign investors like us to invest in India which offers huge opportunities to foreign companies and investors. I believe that success in India ensures success in world said   Mr. Clever Pantoja, Country Head, AJ Group India, at a Seminar organized jointly by All India Association of Industries and World Trade Centre Mumbai in association with the Ministry of Foreign Trade and Tourism, Peru at World Trade Cetnre, Mumbai

Mr. Pantoja, the producer of ‘Big Cola’ – a carbonated caffeine-free soft drink further added that  I already have a presence in India and with my innovative product, range,  competition  and  pricing, it’s a great opportunity for Doing business in India, and many others from Peru and Latin American countries will take up the existing opportunities to invest in India and do business.

“Peru is the 3rd largest country in Latin America with the fastest growing GDP. With rapidly rising economy, it is becoming one of the most important markets for investments in Latin America. It is an attractive business destination for Indian companies in manufacturing, hydrocarbon, mining, agri and agro-processing sectors with low custom tariffs and open investment regime. It is one of very few countries in the world with positive trade balance,” said Mr. Luis Cabello, Commercial Counsellor from Embassy of Peru in India at an interactive programme on ‘Business Opportunities in Peru’.

Mr. Cabello further added that in September 2016, Peru and India concluded the joint feasibility study for an agreement in trade of goods, services, investments and cooperation. Peru and India shall sign the Trade Agreement soon.

Mr. Kanish Gupta, Owner, Supreme Enterprises said that similar to India, agriculture is one of the most important sectors of Peruvian economy. In 2016, it is adjudged as the ‘Best International destination for Super foods’. Peru has been distinguished as the ‘World´s Best Culinary Destination’ for last 5 years in the World Travel Awards. It has large varieties of fruits and vegetables. This includes nearly 4000 varieties of potatoes, many varieties of quinoa, grapes, avocadoes, mangoes, blueberries, corn, citrus fruits, lentils, sea food, etc.

India receives Peruvian organic mangoes around October-November every year. There is a tremendous potential for importing super natural foods such as avocadoes, quinoa, blueberries from Peru added

Earlier, Mr. Vijay Kalantri, President, All India Association of Industries and Vice Chairman, World Trade Centre Mumbai in his welcome address said, “India and Latin America are two complentary economies. India is one of the biggest importers of oil and gas from Latin America and is one of the largest exporters of steel, automobile, IT and pharmaceutical products. The bilateral trade between India and Peru is more than USD 1700 million in 2016-17. There is a great potential to promote tourism in Peru. With value additions in various products, the bilateral trade is expected to grow multifold. This will help to bring in prosperity with high employment and exports.”

Mr. Kalantri further added that distance is no more a disadvantage between India and Latin America. With improved infrastructure, Indian businesses have huge potential to expand their operations in Latin American countries.

Mr. Y. R Warerkar, Executive Director, World Trade Centre Mumbai thanked the dignitaries and mentioned that there is a vast potential of trade cooperation to ignite our economies that are separated by distance and culture. The stronger ties of cooperation and pro-active approach will further help enhancing presence of Indian companies in Peru.

The programme was attended by consul generals, representatives from trade and industry, financial institutions and others. 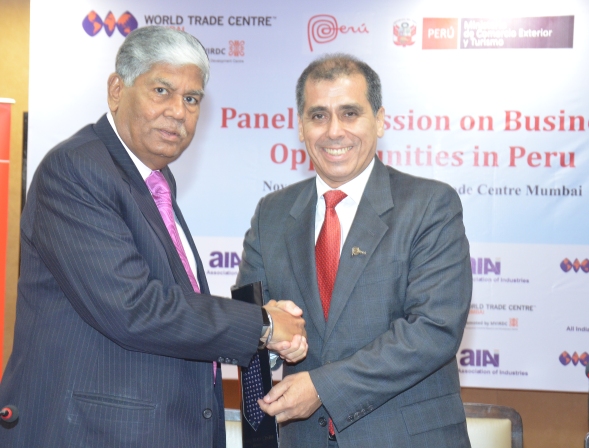