“Indo-Canadian economic relationship assumes great importance against the backdrop of India emerging as a bright spot in the world economy and Canadian economic growth gaining momentum. Both countries have great scope for co-operation in high-end technologies, infrastructure, renewable energy, education etc. Canada is gifted with huge amount of natural resources especially in renewable energy sources, while India is the second most populous country and one of the fastest growing economies in the world. Considering this, the present level of bilateral trade ($6 billion) between both countries is too less and there is huge scope for expansion of commercial ties in the days ahead,” remarked Mr. Jordan Reeves, Consul General of Canada in Mumbai at an interactive meeting with a high level business delegation from Canada led by Mr. Sanjay Makkar, President, Indo-Canada Chamber of Commerce. The meeting was jointly conducted by All India Association of Industries and World Trade Centre Mumbai in association with the Indo-Canada Chamber of Commerce.

Canadian investors are bullish on the Indian economy as is evident from the fact that they have made around $11 billion investment in India so far, much of which has been made in the last one year, Mr. Reeves informed.

Explaining the potential for co-operation in the science and technology space, Mr. Reeves said there are a number of research institutes, start-up companies, universities in Canada that have developed innovative technology solutions for businesses. These organizations look out for partners who can commercialize these technologies. Considering that many Indian companies seek to adopt cutting-edge technologies, there is huge scope for collaboration between these companies and technology developers in Canada.

In the education sector, India became the largest country to send students for higher studies to Canada in 2015. Presently, around 50,000 Indian students study in different universities of Canada and this bodes well for the future economic relationship of both countries. Canadian universities are keen to seek partnership with their Indian counterparts, he added.

Further he informed that in the energy sector, there is lot of scope for co-operation in renewable energy and nuclear power. Canada is a major exporter of uranium mainly used in producing nuclear energy and there is huge scope for collaboration between both countries in this area, as well.

Agriculture and food processing are also potential areas for co-operation between both the countries. Canada exports pulses, lentils, food grains to different countries. Specifically, it supplies around 40% of lentils consumed in India. There is a lot of scope for collaboration in the processed food sector, as very few Canadian food processing companies have explored investment opportunities in India.

Later, Mr. Makkar shared details of the fruitful business meetings and agreements inked during the 11-day trade missions conducted by the Chamber between January 4 – 15 to facilitate commerce between both countries. The visit to the World Trade Centre Mumbai is the last on the itinerary. These trade missions aim to enhance cross-border partnership of small and medium enterprises (SMEs) that constitute 40-50% of the Canadian economy. During this mission, the participating delegates signed several agreements with many organisations including industry bodies like FICCI, Trivandrum Chamber of Commerce & Industry, State Government of Uttar Pradesh, non-government organisations, film producing companies etc.

Mr. Aditya Rasiwasia, Committee Member, All India Association of Industries, in his welcome address, informed that around 1.3 million Indians (3% of Canadian population) live in Canada. There is great scope for co-operation between India and Canada in the field of renewable energy at a time when the Indian government is implementing the Smart Cities project.

Dr. Yadnya Pitale, Joint Director, Research and WTI, World Trade Centre Mumbai, delivered the vote of thanks for the event. 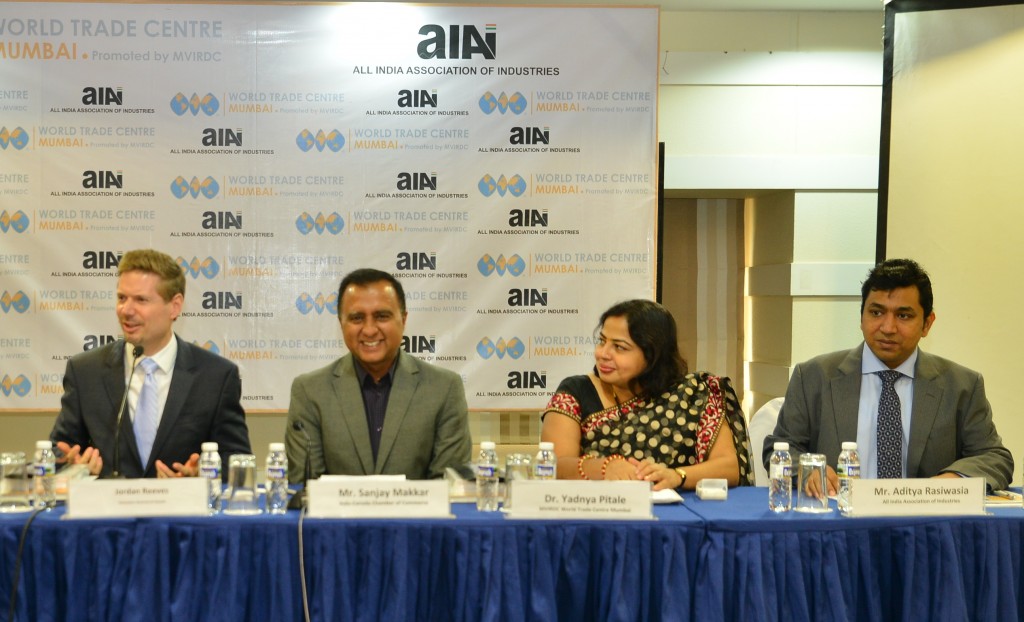