“The business community from the Chinese province of Xiamen is keen to invest and trade with India in the areas of infrastructure, energy and electronic goods. World Trade Centre Xiamen, China Council for the Promotion of International Trade Xiamen Committee and Xiamen Chamber of International Commerce would jointly work with World Trade Centre Mumbai and All India Association of Industries (AIAI) in promoting trade between Xiamen and India. To promote this co-operation, information on legal, regulatory and policy environment in India must be furnished to Chinese companies regularly and a one-point contact established. Chinese entrepreneurs are also seeking collaboration with their Indian counterparts in the e-commerce sector,” remarked Mr. Zhong Chen, Vice Chairman, World Trade Center Xiamen during an interactive meeting with the members of the World Trade Centre Mumbai at the World Trade Centre on December 7, 2015. The delegation from World Trade Center Xiamen was led by Mr. Scott Wang, Vice President Asia Pacific, World Trade Centers Association. Mr. Vincent Lin, Director, Ribest Ribbons & Bows (India) Pvt Ltd was also part of this delegation. The purpose of the visiting delegation is not only to strengthen the bilateral relation between Xiamen and India, but also to invite members of WTC Mumbai to China International Fair for Investment and Trade (CIFIT) which is scheduled in September 8-11, 2016 in China.

During the meeting, World Trade Center Xiamen signed two Memoranda of Understanding (MoUs), one with World Trade Centre Mumbai and the other with All India Association of Industries (AIAI) to facilitate business between both the countries.

Mr. Wang informed that the Chinese missions to India have been the highest by far in the last one year. He highlighted the need for strengthening the commercial ties between India and China. He said the east Asian economies, which include China, Japan have had strong economic relationship with south east Asian countries like Indonesia, Vietnam, Thailand etc. However, east Asian economies do not have strong economic ties with India and other south Asian economies. In this regard, he said World Trade Centres Association would take all efforts to strengthen commercial relationship between India and China. As part of this effort, he said World Trade Centers Association would promote extensively the Global Economic Summit 2016 and he would ensure the participation of Chinese delegation in this event. World Trade Centers Association would also organize a training programme to inculcate best practices in trade promotion among World Trade Centres in India, Mr. Wang said. Pointing out that there are 46 World Trade Centers in China, Mr. Wang suggested Indian entrepreneurs to take the service of these centers while doing business in China.

Further elaborating China’s commercial presence in India, Mr. Chen said China Council for the Promotion of International Trade (CCPIT) is operating a sales and marketing office in Mumbai. He informed that CCPIT promotes exports of goods and services from China to India in 13 sectors. He further said that the World Trade Centre Xiamen has proposed India as an important market to be linked by the ambitious One Belt One Road project, being implemented by the Chinese government.

Mr. Lin pointed out that there are many advantages in investing in India. The advantages include availability of cheap labour, availability of land, power and other infrastructure facilities. Specifically, he said the cost of labour in India is around 30% cheaper than that in China.

Speaking about his organization’s activity in India, Mr. Lin said Ribest Ribbons & Bows (India) Pvt Ltd exports polyester fibres from its manufacturing facility in Visakhapatnam to China. In the coming days, the company plans to invest more in India and export polyester fibres to the USA and Europe, he informed.

Referring to the factors favourable for Indo-Chinese business co-operation, Mr. Kalantri pointed to the progressive policy measures of the Indian government including the ambitious Make in India campaign, steps to improve the ease of doing business etc. He advised Chinese entrepreneurs to source raw material from China and manufacture finished goods in India. He also suggested them to explore investment opportunity in the infrastructure sector in addition to manufacturing. He suggested Chinese companies to avail financial assistance from Industrial and Commercial Bank of China Ltd, which has its operation in Mumbai. 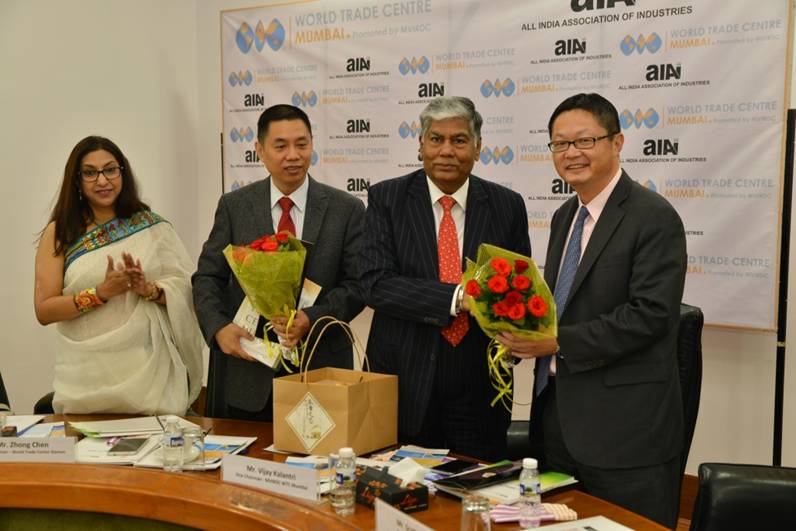