Brazilian delegation to Mumbai was on a mission to engage vistas for trade, commerce and investment interchange possibilities for the future

Mumbai, October 18, 2016: “Brazil’s trade with India has immense scope for expansion which currently accounts for 1.21% of India’s total trade. The total trade between India and Brazil is at USD 6.69 billion in 2015-16. The market opportunities lie in the areas of food and drinks (coffee, tea, fruits, cocoa, and confectionary products), home and building (woods), machinery and equipment (vehicles and auto parts), mineral products and chemicals. Brazil has recently launched a new infrastructure Program, called Crescer (meaning ‘grow’) which will focus on concession, privatization and public-private partnerships, Brazil and India should rather look for complementarities and synergies between their respective markets and mind-sets in order to increase and upgrade their business potential. For more business to take place, people have to visit each other more frequently. I am a strong believer of people-to-people relations to cement long-term and sustainable partnerships”, said Ms. Rosimar da Silva Suzano, Consul General, Consulate General of Brazil in Mumbai at the International Business Round Table organized by All India Association of Industries, World Trade Centre Mumbai, ApexBrasil and Ministry of Foreign Affairs Brazil at the World Trade Centre Mumbai.

Under the Make in India initiative, India is undergoing a series of reforms that have already enhanced the competitiveness of the country.

Introducing the Maharashtra Industrial Development Corporation (MIDC), Mr. Gajanan Patil, General Manager-Marketing said, “MIDC is the largest industrial development corporation in India having 264 industrial parks and approximately 73,000 hectares of land. Maharashtra attracts 29 percent (1/3rd) of the FDIs that come to India and accounts for a total of 14 percent of India’s GDP”. Highlighting the importance that MIDC, he said that with a diversified portfolio MIDC is a one-stop shop for setting and selling industries in Maharashtra.

Ms. Lara Gurgel, representing Apex-Brasil, the trade promotion agency in Brazil, provided an overview. She said that Apex-Brasil supported 80 sectors of the Brazil economy, agriculture being one of the main sectors. The main objective of the trade investment agency is to provide exchange of information between countries through the support of the local facilitators such as the consulate and local trade promotion bodies. She introduced all the companies on the delegation that were looking forward to the business-to-business meetings, thereafter.

Mr. Vijay Kalantri, President, All India Association of Industries in his opening remarks said, “India and Brazil share a special relationship and tremendous opportunities lie between them especially in natural resources, besides traditional areas such as agriculture, food processing, oil & gas, mining, textile, spinning etc. With the successful conclusion of the 8th BRICS Summit in Goa, individual countries should work towards the success of BRICS, going forward.  Currently India is growing at a rate of 7.6 percent and aiming to increase 8-10 percent which is possible firstly by providing concession in freight costs. Secondly, he stressed that rather than taking the whole spectrum of sectors we should have focused on five major areas of collaboration. One such sector is technology which India requires and can be fulfilled through collaborative efforts with Brazil. In conclusion, Mr. Kalantri emphasized since India has a demographic dividend of 1.2 billion population having youth under the age of 35, we are a consumer market and Brazil must explore various business and trade opportunities with India. 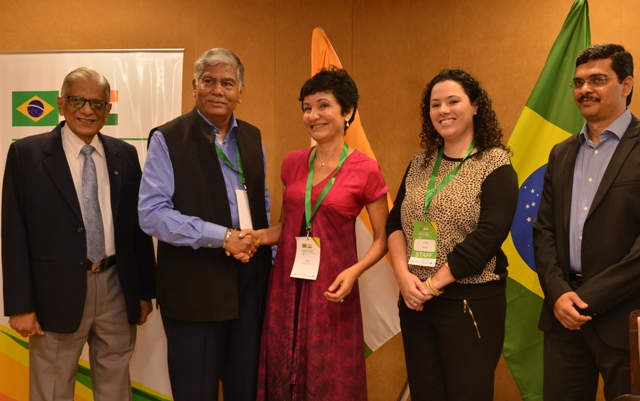 From Left to Right: