“Khanty-Mansiysk Autonomous Okrug–Ugra is the fourth leading region in Russia in the information technology (IT) sector. The overriding priority of the regional government of Khanty-Mansiysk is to develop its IT sector by forging sustainable partnership with India, which is the leader in the world of IT. As part of this initiative, Khanty-Mansiysk government is planning to set up Ugra Technology Park in Maharashtra. Further, we look forward to the active participation of Indian companies in the forthcoming IT Forum to be held in Khanty Mansiysk on June 8-9, 2016,” remarked H.E. Mr. Aleksey Zabozlayev, Deputy Governor, Khanty-Mansiysk Autonomous Okrug – Ugra, Russia at an interactive meeting with the members of All India Association of Industries and World Trade Centre Mumbai on April 13, 2016.

H.E. Mr. Zabozlayev attended the interactive meeting with the top officials of his administration.

Besides IT sector, H.E. Mr. Zabozlayev also expressed interest to partner with India in sectors like telemedicine, mining and processing of quartz concentrate and timber industry. The Khanty-Mansiysk region has successfully implemented a pilot project on telemedicine to provide affordable healthcare to masses in the rural and remote areas of the region. The regional government wants to promote this model of healthcare delivery to other member countries of BRICS. Russia is a leading country in mining and processing of quartz concentrate and micropowder which are used in Nano electronics, optics, semiconductor and other parts used in the information technology industry.

Mr. Pavel Tsiporin, First Deputy Director of IT Department, Khanty – Mansiysk Autonomous Okrug – Ugra said, “India’s leadership in information technology is well known. The government of Khanty – Mansiysk is exploring the possibilities of joint venture with India in producing hardware and software. One possibility is development of software for the Government of Russia.”

Mr. Maxim Shushpanov, Deputy Director of Medical Center for Information and Analysis, Khanty – Mansiysk Autonomous Okrug – Ugra informed that one of the priority of the Khanty-Mansiysk government is the provision of affordable medical services to its masses. In order to achieve this goal, the government is creating cost-effective and self-sustaining healthcare infrastructure by adopting cutting edge information technology in the regions of BRICS (Brazil, Russia, India, China, South Africa) countries.

Earlier in his welcome address, Mr. Vijay Kalantri, President, All India Association of Industries and Vice Chairman, World Trade Centre Mumbai said “In the next three years, bilateral trade between India and Russia would grow to $12 billion from the present level of $6 billion. Bilateral relationship between both the countries could enhance further with regular visits of Prime Ministers of both the countries and exchange of delegations. This would also bolster the cultural and trade ties of both the countries. Russia is strong in oil and gas, fertilizers, capital goods, defence etc. Information technology and healthcare industries are the emerging areas of co-operation between India and Russia. All India Association of Industries and World Trade Centre Mumbai will lead a delegation from India for IT Forum 2016. 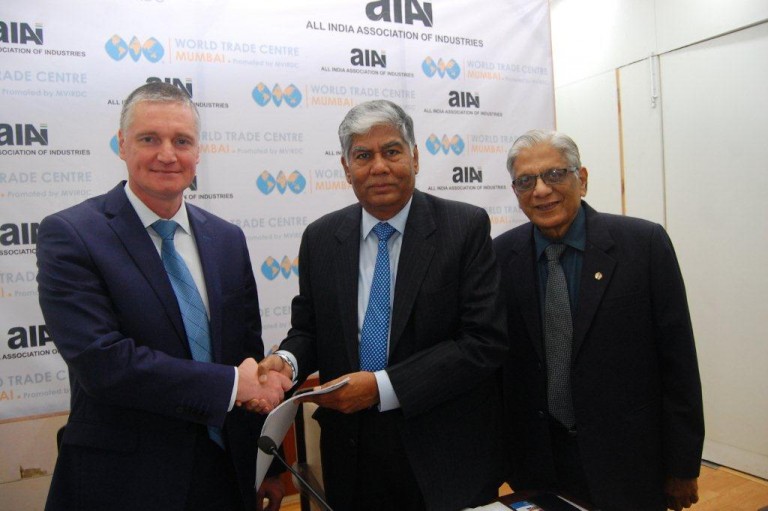