“Suriname is very keen on strengthening relations with India and the vision of our Hon’ble President is to further strengthen South-South Co-operation and with the BRICS trading blocks. There are tremendous opportunities for Indian companies in sectors such as Oil & Gas, Mining, Gold, Solar Energy to explore and I am here to further facilitate and initiate dialogue to work closely with India and Indian counterparts,” said Mr. Gillmore Hoefdraad, Hon’ble Minister of Finance, Republic of Suriname at the Suriname Business Forum organized by All India Association of Industries and MVIRDC World Trade Centre Mumbai .

Although, the population of Suriname is half a million it has tremendous natural resources in the areas of Mining, Gold, Bauxite, Oil & Gas and Copper. This offers Indian entrepreneurs tremendous opportunity to set up industry and supply CARICOM and Latin American Countries (LAC) countries in the light of the Free Trade Agreement (FTA) with them and further, to explore the preferential markets in Europe and ACP states, stressed Mr. Hoefdraad.

Agriculture is another area which offers tremendous opportunities and not only Suriname, but also the markets in and around the country are huge and which India can explore as it is quite ahead in agro and technology, offering itself as our partner in progress. The economy of Suriname is well recovered from the downturn where the inflation was over 50% and has fallen now to 20%. The Government of Surinam is further working on stabilizing the economy. This has become possible due to our efforts in diversifying the economy away from mining and agri sector and creating more opportunities in manufacturing and natural resources added Mr. Hoefdraad.

I was keen to come to India and I have come after my visit to China and Russia. As I see tremendous potential between our two countries.

Earlier in his welcome remarks, Mr. Vijay Kalantri, President, All India Association of Industries (AIAI) and Vice Chairman, World Trade Centre said, “India’s bilateral trade with Suriname stands at USD 56 million today. I expect this trade volume to double in the next three years through greater co-operation between both the countries. WTC and AIAI are willing to promote bilateral trade by partnering with trade promotion organizations and industry bodies in Suriname.”

The event was attended by consul generals, representatives of MSMEs, delegates from corporate houses, financial institutions and others.

During the interactive meeting, entrepreneurs from sectors such as jewellery, agriculture, mining, shipping and logistics had interactions with Mr. Hoefdraad to explore on business opportunity in Suriname in these sectors. 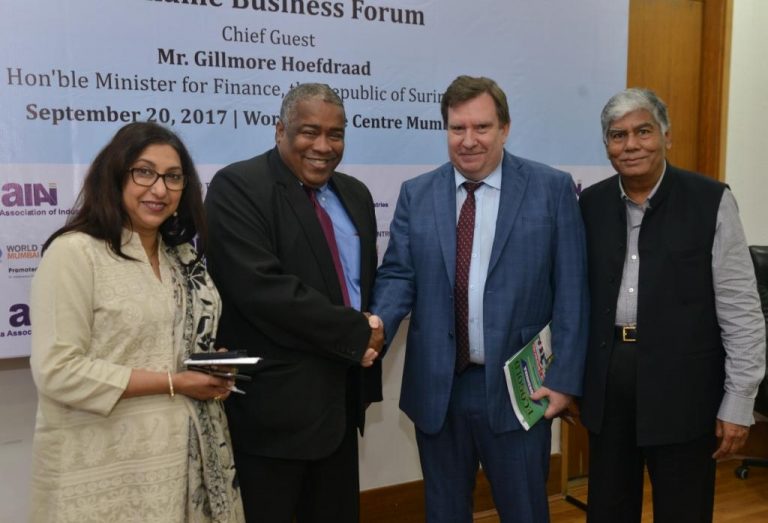