India and Iceland share good diplomatic and business relations for more than 40 years. Moreover the strong fundamental values such as democracy, universal human rights, the rule of law and the peaceful settlement of disputes makes Iceland a good investment destination stated H. E Mr. Thorir Ibsen, Ambassador of Iceland to India at an Interactive Meeting organized by the All India Association of Industries and the World Trade Centre Mumbai.

H. E Mr. Ibsen further added that business relations with India have been growing over the years, however the volume of trade in goods is only US$ 29 million. Both countries have the highest economic growth in their respective regions 4.2% in Iceland and 7.3% in India.

His Excellency informed the members present that Iceland is very scenic and an excellent location for filming. A number of high profile Hollywood and Bollywood movies have been shot in Iceland like the Bond movies, Star Trek, Star Wars, Oblivion and the famous song sequence Geruaa from Dilwale.

His Excellency also added that Iceland attracts one and half million tourists every year with a 16% to 18% growth in tourism per annum. Tourists come there to enjoy the clean air, pure water, pristine landscape and unspoiled nature. Emphasizing that the number of tourists visiting Iceland every year is 5 times greater than the population of Iceland.

His Excellency informed that the Country is rich with renewable energy which contributes nearly 90% of hydro and thermal power.  Adding that geothermal water are in abundance in Iceland and are used for many purposes such as  heating,   spas, melting of snow as well as in nutrient supplements.

H. E Mr. Ibsen also informed that Iceland is an open market economy with a EU legislative framework inclusive of Schengen but is not part of the EU political region. The country has good infrastructure and rich young and well-educated population.

His Excellency further stated that the Iceland offers a favourable business environment with low corporate tax of 20 per cent and availability of land and industrial sites at competitive rates and long term contracts.  Further, he informed that the country has a favourable global business location and bridges two of the world´s strongest markets, USA and EU and offers access to the EU Single Market with population of 500 million and has Free Trade Agreements with 38 countries, with negotiations underway with 8 more countries, including India. His Excellency emphasized that Iceland is strategically well located for the future sea route over the North-Pole and through the North-East Passage linking Europe and Asia with the shortest shipping route

Mrs Rupa Naik, Executive Director, All India Association of Industries (AIAI) in her welcome address said that there are immense opportunities areas for co-operation between Iceland and India. Though we share a very cordial and long relationship with the country there still are many areas that remain unexplored and we can further co-operate in sectors such as food, IT, entertainment, garments and hi tech sectors such as biotechnology, food processing and renewable energy. 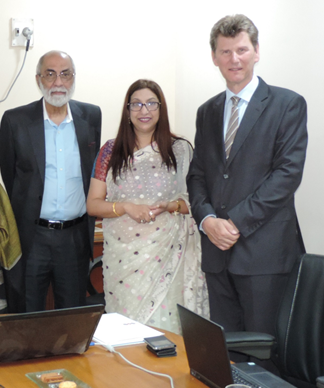