Can GST protect India post Brexit turmoil? Experts want India to offset any adverse impact of Brexit by passing the GST in the upcoming monsoon session
Press Release
by aiai-india

Can GST protect India post Brexit turmoil? Experts want India to offset any adverse impact of Brexit by passing the GST in the upcoming monsoon session

Mumbai, June 24, 2016: Even as global markets plunged following Britain’s exit from the European Union, the sentiment in the financial capital of India was – How will it impact India? At a workshop in the city, experts felt that passing the GST in the Rajya Sabha will be the best way to tackle post Brexit uncertainty in India.

“The GST network is ready; the IT infrastructure to support the regime is in place. There is a likelihood that the GST Bill can also be passed by at least 50% of the state governments. However, the real test would be the passage of the bill in the Rajya Sabha,” remarked Mr Abhishek A Rastogi, Director, Tax & Regulatory Services, PricewaterhouseCoopers (PwC) at the Make in India Fourth in Series Workshop on ‘Implications of GST – Industry Perspective’ organised jointly by All India Association of Industries and World Trade Centre Mumbai, supported by IDFC.

“I expect the Congress to oppose GST, other parties will support. But will the Rajya Sabha proceedings will go on time, will there be disruptions? I cannot predict that,” Rastogi said raising a concern.

Speaking about the pros and cons of the GST regime, he stated that the government has included various provisions to make the GST regime tax-payer friendly, reduce litigation, transfer of unutilised input tax credits and so on. In fact, the Integrated Goods and Services Tax (IGST) is the most innovative and appropriate model for a federal country like India. However, there are some areas of concerns which include valuation of barter transactions, definition of some transactions, he pointed out.

Speaking on this occasion, Mr Firoze B. Andhyarujina, Senior Advocate, Supreme Court, that GST is a time supply tax in contrast to excise. He said that GST would promote India’s economic growth and offset any adverse impact on the economy from Brexit. “This workshop on GST is being held on an historic day when British citizens voted to leave European Union. The exit of Britain from European Union would have a far-reaching impact on global economy, especially on international trade. The Indian government must use this development to introduce GST and support economic growth.”

Mr Andhyarujina raised hope that the GST regime would reduce the number of litigation between the industry and tax authorities. He informed that while the government’s tax collection doubled in the last five years, the tax disputes has risen over 600% during the same period. The government has to pay Rs 1 lakh crore in FY16, the senior advocated pointed out.

He stated that there are some onerous provisions in the GST bill. For example, it is the onus of the buyer to conform whether the seller has paid the tax on inputs. Also, the benefits given to employees are not eligible for claiming input tax credit. However, there are more contentious issues that need to be ironed out. These include issue of dual control by central and state governments, the determination of revenue neutral rate and so on.

Talking about GST on E-commerce sector, Andhyarujina pointed out that it would improve the tax base. “Non filing of returns within 6 months would mean losing dual registration – State and Central,” he added.

Earlier in her welcome remarks Ms Rupa Naik, Executive Director, All India Association of Industries (AIAI) and Director- Projects, World Trade Centre Mumbai, said, “GST is a path-breaking reform in India’s indirect taxation system and I expect the introduction of this regime to boost manufacturing sector of the country.”

During the event, India’s leading financial institution IDFC, which started banking operation in October 2015, made a presentation on how it would simplify banking services by adopting cutting edge technologies.

Rastogi concluded the workshop by recalling that the GST Bill has been tweaked enough to favour business. “The banking industry has been gearing up, holding discussions. However, the training of the government officers is a concern. They will have to unlearn from the past and a change in temperament is essential,” he added. 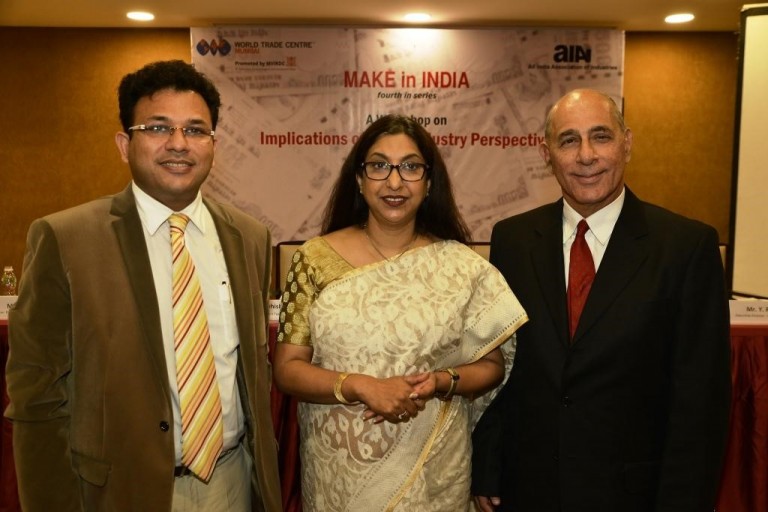