“Enhancing India’s share in world exports is the top priority of Directorate General of Foreign Trade (DGFT). In the next two weeks, DGFT will hold a series of interactions with exporters to understand their concerns and grievances in adopting the Goods and Services Tax (GST). This Open House Meeting is a timely opportunity for DGFT to invite actionable suggestions from exporters to address the key issues on GST. I assure that your suggestions will be considered by the Ministry of Commerce before releasing the mid-term review of Foreign Trade Policy (2015-20) in September 2017,” said Dr. Sonia Sethi, IAS, Additional Director General of Foreign Trade, Directorate General of Foreign Trade, Mumbai during an Open House Meet organized at World Trade Centre Mumbai on August 18, 2017. The Open House Meet was organized jointly by World Trade Centre Mumbai and All India Association of Industries (AIAI).

Allaying the fears of exporters, Dr. Sethi remarked, “GST will make our exports competitive in the long run. There may be some teething troubles in the short term. All the ministries of Government of India are working overtime to address these operational issues.”

Dr. Sethi also mentioned the recent initiatives taken by DGFT to address issues faced by exporters. “In the last one year, DGFT has maintained ‘zero pendency’ of work by clearing all the files of importers and exporters within reasonable timeframe. In the immediate future, all the functions of the DGFT will be digitized to improve performance efficiency and reduce human interface. DGFT is holding Open House Meeting every Wednesday to address the concerns of traders. Our Grievance Redressal Committee at the Mumbai zonal office is functioning efficiently in this matter.”

Dr. Sethi also remarked that in future, DGFT – Mumbai plans to work with the Government of Maharashtra to enhance exports from the state.

Earlier in his welcome remarks, Mr. Firoze B. Andhyarujina, Senior Advocate, High Court Mumbai, “GST is a visionary reform in India’s indirect taxation system. GST has converged 22 indirect taxes into three taxes and thereby simplified the indirect tax system. However, there are several unresolved issues in the GST system. These issues include the issue of double taxation of re-exports, adjustment of input tax credit, compliance with procedures, tax implication on construction contracts involving joint venture of foreign and Indian companies and so on.”

Ms. Rupa Naik, Executive Director, All India Association of Industries proposed the ‘Vote of Thanks’ for the event. Speaking on this occasion, Ms. Naik remarked, “GST is a welcome reform in India’s indirect tax system as it would reduce the time and cost incurred on logistics. After the implementation of GST, most state governments have abolished check posts in state borders, thereby improving the ease of movement of goods across borders.”

On this occasion, senior officials from DGFT explained relevant changes in the procedures and implementation of various export promotion schemes of Government of India under the GST regime.

During the event, exporters from gems and jewellery, textiles, food products and other sectors raised their concerns regarding GST and offered suitable suggestions to the DGFT. AIAI and WTC Mumbai will prepare a detailed representation on issues faced by exporters pertaining to GST and will submit to DGFT for active consideration. 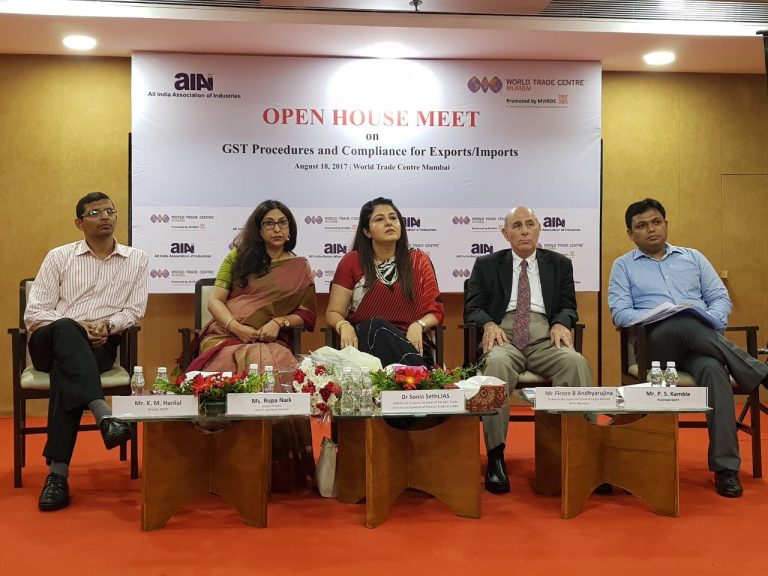