“Union Budget 2016-17 is a welcome balancing act of adhering to the fiscal prudence and at the same time addressing the infrastructure needs of the rural areas. The finance minister has taken various tax measures keeping in mind the interest of small tax payers, promotion of Make in India, simplification and rationalization of tax structure and other progressive goals,” said Mr. Ravinder Saroop, IRS Commissioner of Central Excise & Service Tax Large Taxpayer Unit Mumbai at an interactive panel discussion on ‘Implications of the Union Budget 2016-17’ with special emphasis on direct and indirect taxes on 3rd March, 2016.

Mr. Saroop further pointed out that the budget has some welcome provisions like increase in allocation to the crop insurance scheme, relaxation of norms on foreign direct investment in sectors like pension, insurance, asset reconstruction etc.

Speaking on this occasion, Mr. Firoze B. Andhyarujina, Senior Advocate, High Court Mumbai welcomed some of the progressive steps like increase in the turnover limit for small and medium enterprises under the presumptive taxation scheme and extension of this scheme even to professionals with turnover of less than Rs 50 lakh is welcome. He said this scheme would reduce the burden of maintaining books of account for professionals and SMEs falling under the said turnover limit. However, Mr. Andhyarujina was critical on the imposition of additional tax of 10% on recipients of dividend of more than Rs 10 lakh. He said this additional levy is against the canon of taxation as this would create a situation where the profits are taxed at three stages (one at the corporate level, second at the stage of distributing dividend and third at the hands of recipients [additional 10% tax]).

While praising the government’s intention of bringing back the black money to the system by opening the compliance window scheme, Mr. Andhyarujina cautioned that the success of this scheme depends on the method of valuation adopted to assess the undisclosed assets.

Mr. Andhyarujina also remarked that the government has not announced how it is going to spend the fiscal savings it made owing to the decline in the price of crude oil in the international market.

Mr. Dadi B Engineer, Senior Partner, Crawford Bayley & Co said, applauded the government for sticking to the fiscal deficit target of 3.5% and thereby maintaining fiscal prudence. He remarked that the hallmark of a good budget is that it should adhere to fiscal discipline, rationalize subsidies, and try to control inflation. He raised hope that the budget would reduce the huge number of pending litigations in various courts across the country.

Mr. M. S. Mani, Senior Director – Indirect Tax, Deloitte Touche Tohmatsu India Pvt. Ltd remarked that the budget has tried to rationalize and simplify the compliance procedure for tax payers. He pointed out that 95% of the tax provisions in the budget are aimed at rationalization. Giving some examples of the tax rationalization measures in this budget, Mr Mani pointed out to the reinstatement of the exemption of service tax in some key infrastructure sectors with retrospective effects. In another example, the government has listed all the services of statutory bodies like EPFO, IRDA, SEBI under exemption notice in order to clarify that their services would not be taxed.

Mr. Mani, however, expressed disappointment at the government’s move to extend the period of limitation from one year to 2 years for excise duty payers and from two years to 2.5 years for service tax payers. The extension of period of limitation means the books of records has to be preserved for longer period of time. This imposes a onerous responsibility on tax payers, Mr. Mani remarked.

Earlier in his welcome address, Capt. Somesh Batra, Vice Chairman, World Trade Centre Mumbai remarked, “Through this budget, the government has tried to achieve the triple goals of supporting the rural economy, improving the ease of doing business and creating a non-adversarial tax regime. The budget has rightly provided renewed impetus to the rural infrastructure through increased budgetary allocation for irrigation, rural roads, electricity and so on while also maintaining policy momentum on its flagship programmes like Skill India, Digital India. We welcome the measures focused on the MSMEs like raising the turnover limit under Presumptive taxation scheme to rupees two crores, expanding the scope of duty drawback scheme, proposed amendment to the Companies Act to improve ease of doing business. The government has also taken some progressive reforms like relaxing Foreign Direct Investment (FDI) limit in pension, insurance sectors, reducing corporate tax for upcoming manufacturing companies, setting up Bank Board Bureau etc.,”

Delivering the vote of thanks for the budget, Mr. Vijay Kalantri, President, All India Association of Industries and  Vice Chairman, World Trade Centre Mumbai pointed out that this is the first time the union budget is addressing rural growth concerns after a gap of 13 years. He raised hope that the budgetary measures towards boosting rural infrastructure would bear fruits in the next one year. Speaking on the government’s efforts to combat tax evasion, Mr Kalantri said tax authorities must encourage high value retail transactions to be conducted through cash and tax them at a nominal rate. He further suggested that the government must reduce tax rates across all sectors in order to ensure tax compliance. 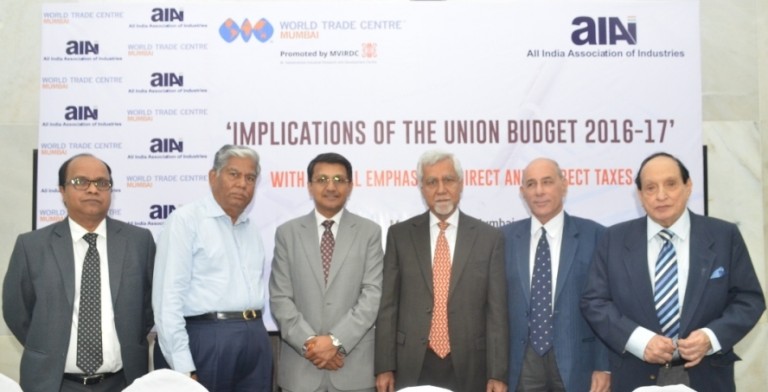