February 21, 2017: “As the Father of the Nation Mahatma Gandhi said – The best way to find yourself is to lose yourself in the service of others. So, I am here as a serviceman of my country,” said H.E. Mr. Archil Dzuliashvili, Ambassador of Georgia to India at an interactive meeting organized by All India Association of Industries (AIAI) and World Trade Centre (WTC), Mumbai  in association with the Consulate  of Georgia in Mumbai.

H.E. Mr. Dzuliashvili said that“I respect India for its great history, great culture, largest democracy and major economy is a Nation of Bright Future”.  This year, the Embassy of Georgia in India is celebrating the 25th anniversary of the establishment of diplomatic relations with India and the Georgian Ambassador vowed to enhance consultations and explore possibilities of co-operation with India in the fields of culture, trade and economy. He added that Georgia is the 3rd safest country in the world and it offers huge investment opportunities in hospitality, real estate, tourism, pharmaceuticals, food processing, among others.

H.E. Mr. Dzuliashvili said that the Government of Georgia has come forward with many investment opportunities to promote industrialization and hospitality industry. The Ambassador called Indian companies to use Georgia as a hub for entry into the European market as the country has signed Deep and Comprehensive Free Trade Agreements with the European Union. Georgia has also signed free trade agreement with Turkey and Post Soviet countries, he added.

Some of the other advantages in Georgia are absence of import tariff on 80% of goods, low cost of power, availability of subsidized loan and free land for setting up factories, tax-free industrial zones. The Georgian government also offers single window system for pre-investment and post-investment clearances to entrepreneurs.

Speaking on this occasion, Mr. Satinder S. Ahuja, Hon. Consul, Consulate of Georgia in Mumbai said,” Georgia has a liberal visa regime and manufacturing companies can set up a facility in a minimum time frame as all administrative clearances are fully integrated across government departments. The country offers tremendous scope for large industrial companies in iron ore, aluminium, steel and other energy intensive sectors as electricity is cheaply available. The country also offers investment opportunities in food beverages, tourism, pharmaceuticals, wood, paper and textile sectors.”

Earlier in his welcome remarks, Mr. Vijay Kalantri, President, All India Association of Industries and Vice Chairman, World Trade Centre, said,”I hope India would improve its ties with Georgia under the leadership of the new Ambassador. Georgia is a potential hub for India’s trade with the European Union. The country offers huge opportunity for entertainment industry due to its scenic beauties. The country has a liberal visa regime as it offers visa on arrival for foreigners holding visas of the USA, UK, EU and Shenzhen. Today, the bilateral trade between both the countries stand at USD 107 million and I expect it to grow higher and faster in the next five years.”

The meeting was well attended by Consular Corps, Industrialists and Officials. 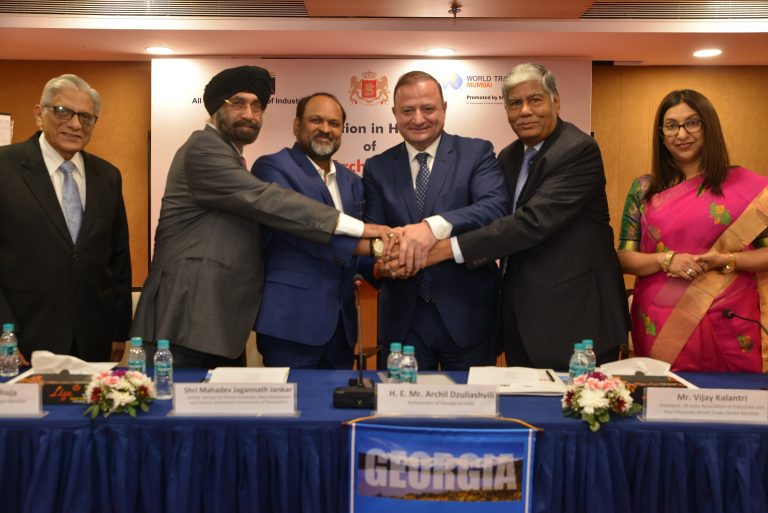 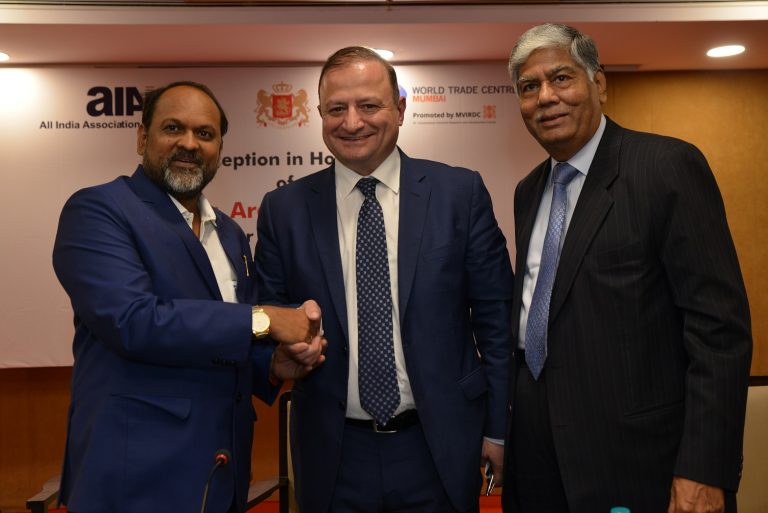