India has moved with a great sense of priority and speed to turn India’s “Look East Policy” into an “Act East Policy”. ASEAN is at the core of India’s Act East Policy and at the centre of our dream of an Asian century. These observations were made by Shri Anil Wadhwa, Secretary (East), Ministry of External Affairs, Government of India while addressing the Run Up event on ASEAN India Cooperation in Food Security, Agriculture Technology And Food Engineering for Delhi Dialogue VII, here today. Referring to ASEAN India cooperation in agriculture and forestry, Mr. Wadhwa said that the sector forms an important part of the collaborative agenda between ASEAN and India. The Visions Statement adopted during the 2012 Commemorative Summit recognized the need to ensure long-term food security in the region and Mr. Wadhwa welcomed the efforts to strengthen cooperation in the agriculture sector between ASEAN and India.  During the last ASEAN-India summit in November 2015 at Nay Pyi Taw, the President of Myanmar floated the idea of having a regional food mechanism. ASEAN and India will intensify their collaborative efforts towards this end.

Recognizing that agriculture and food security is one of the key components of a nation’s overall growth plan, Mr. Wadhwa emphasized that it is not just the growth in GDP but the ability to ensure food and nutrition security at affordable and stable prices in an ecologically sustainable paradigm that is fundamental to long term global peace and stability. Agriculture is particularly important in the context of our region as most of our population depend on it for survival, Mr. Wadhwa said.

Highlighting the importance of agriculture for ASEAN, Mr. Wadhwa mentioned that majority of ASEAN countries are agrarian economy and rely heavily on the agro food sector for economic growth, trade and investments. A number of ASEAN countries are among the top exporters globally for products like rise, fruits, vegetables and coffee and the region is also the global leader in industrial crop such as palm oil, rubber, cashew nuts and pepper. Further ASEAN and India face similar challenges in agriculture such as shrinking land base, dwindling water resource, shortage of farm labour and increasing cost and uncertainties associated with volatility in international markets.

Mr. Wadhwa stressed that diversification towards higher value crops and livestock remains the best way not only to improve farm incomes and accelerate growth, but also to reduce stress on natural resource which forms the farmer’s production base. The challenges are common to the region and their impact often cuts national borders. This calls for close cooperation between our countries to tackle such issues effectively.

Indian and ASEAN have, so far identified four components for cooperation, the first of which is enhancing co-operation in key areas for mutual interest to improve productivity and meet the challenges of food security. Both ASEAN and India are also involved in capacity building, technology transfer and joint R&D. Last but not the least opportunities are provided for farmers from ASEAN countries and India  to learn and develop more efficient farming practices and management skills through information sharing via exchange programmes that are funded under the ASEAN India Cooperation Fund, Mr. Wadhwa revealed.

Earlier in his welcome address Mr. Vijay Kalantri, President All India Association of Industries and Vice Chairman World Trade Centre, Mumbai said that over two decades of India and ASEAN Dialogue Relations have intensified our mutual relations and understating and contributed to enhanced regional development, peace, stability and security in the region.

Mr. Kalantri said that ASEAN and India must work together to ensure food security in the region and ensure active trading and easy accessibility of Asia’s main staple-rice. Further, ASEAN and India can successfully co-operate in many areas of agriculture. Both need to promote and intensify cooperation by exchange of information and technology, research and development projects and strengthening human resources development. More importantly, yields and resource used efficiency must go up. With resource such as water, energy and labour becoming scarcer it is paramount to produce more with less. There is little doubt that we need to come up with a more sustainable and environment friendly way of growing foods. ASEAN India joint efforts need to concentrate in some of these aspects in order to build sustainable agri and eco system. Mr. Kalantri said. 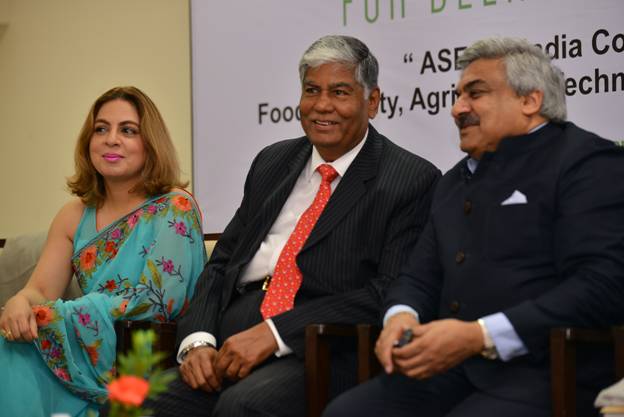