Uzbekistan is earnestly working to liberalize systems and norms and removing hurdles faced by Indian businessmen, said Mr. Abdulaziz Kh. KAMILOV, Hon’ble Minister of Foreign Affairs, Republic of Uzbekistan. “We are giving high importance to transport and logistics infrastructure to strengthen bilateral ties. This is a long felt demand of Indian Industry. Both sides are also working in the areas of goods, services, health and education sectors. ”, said Mr. KAMILOV while addressing a joint business forum organized by All India Association of Industries (AIAI) and World Trade Centre Mumbai.

Mr. Kamilov further added that, measures are being taken to liberalize visa regime for business and tourism purposes and considering commencing of direct flights from Mumbai to Uzbekistan.

Mr. Elyor GANIEV, Minister of Foreign Trade of Republic of Uzbekistan said that the bilateral trade between the countries stood at USD 155.76 million in 2016-17 and is projected to rise manifold in the next few years. He further added that the deepening of trade and economic ties between the two countries are on positive track and the setting up of trading house will further strengthen the growing trade relations between India and Uzbekistan.

Mr. Vijay Kalantri, President, AIAI and Honorary Consul of Uzbekistan in Mumbai said that there is need to accord Most Favoured Nation (MFN) status to Indian businesses as also strive for reduction of import duty on leather, textile and other commodities as well as rationalization and simplification of the procedures for registration and certification of business.

Mr. Kalantri, further added that the foreign exchange control and variouscustom procedures are hampering trade between India and Uzbekistan. As both countries are aiming to enhance trade to USD 1 billion in the next couple of years, it is imperative to resolve issues that are impeding trade and industry on fast track. Also, there is dire need to improve transport, logistics infrastructure and visa simplification as well as starting of direct flights from Mumbai, economic and commercial capital of India, to Uzbekistan. 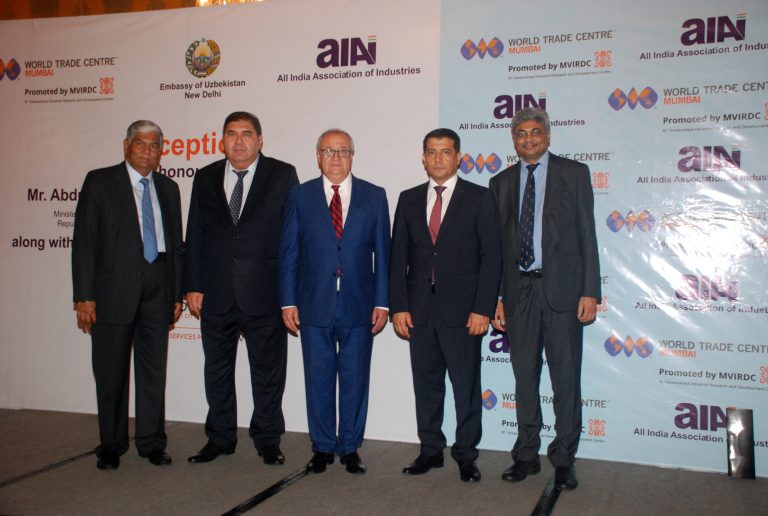