I strongly believe that India’s bilateral trade with Latin America can easily expand to USD 100 billion in the next five years from the present level of USD 46 billion. Today’s event will lead to more trade and investment dialogue between both the regions in future. Distance and language are no longer barriers for enhancing economic co-operation between India and Latin America. In this age of globalization, the world is becoming smaller and English is a global language,said Mr. Sumit Mullick, Chief Secretary, Government of Maharashtra at the Cultural Programme at the India-Latin America & Caribbean Partnership Conclave on Trade and Investment, which was held at WTC Mumbai on June 15, 2017. The programme was jointly organized by the All India Association of Industries (AIAI),World Trade Centre Mumbai, and GRULAC India.

Mr. Mullick further added that I am happy that over 18 Ambassadors from Latin American countries are attending this Conclave which is being held for the first time in Mumbai, the economic and commercial capital of Indiawith participation of more than 250 delegates and had series of around 500 Business to Business Meetings that shall result and translated into bilateral trade, joint ventures and investment opportunities.

“Maharashtra has attracted 50% of total foreign direct investment into India in the last eight months. The state, with 10% of India’s population, contributes 35% to the overall export of India and 15% to the national GDP. Mumbai is the financial and commercial capital of India and natural choice of location for most domestic and multinational companies,” added Mr. Mullick.

Speaking on this occasion, Mr. Ankan Banerjee, Director (LAC), Ministry of External Affairs, Government of India said, “The India-Latin America Conclave turned out to be a very productive and successful event. We hope and pray that India’s business relationship with Latin America grows strength by strength.“EarlierShri. Deepak Kesarkar, Hon’ble Minister of State, Home (Rural), Finance and Planning, Government of Maharashtra explained investment opportunities for Latin American companies in Maharashtra.Mr. K.V. Nagi Reddy, Director – Department of Commerce, Ministry of Commerce & Industry, Government of India remarked, ” There is abundant opportunity to explore new markets and new horizons in Latin America. The industry bodies and chambers of commerce must take advantage of the vibrant condition and the existing trade agreements to promote bilateral trade and investment.

Mr. Vijay Kalantri, President, All India Association of Industries and Vice Chairman, World Trade Centre Mumbai said,” The India-Latin America Conclave is the first of its kind event in Maharashtra. The Conclave is the result of the co-ordinated efforts of AIAI and WTC Mumbai and GRULAC Indiaover the last six months. We are also planning to organize similar conclave to promote India-Africa economic partnership in the near future.”

The Cultural Programme included the performance of classical dance Bharatanatyam depicting the cultural and geographic diversity of India. The Programme was well attended by Ambassadors, senior diplomats from 18 Latin American countries and industrialists.

During this, All India Association of Industries (AIAI) and WTC Mumbai honoured companies that have made exemplary contribution to promote bilateral trade between India and Latin America and Caribbean countries. Companies that were honoured during the event include 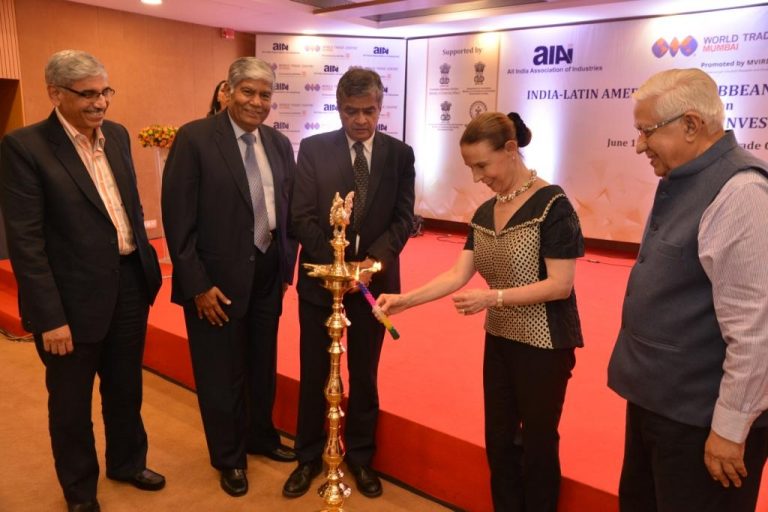