Maharashtra govt wants private companies on board to achieve its skill development target With a target to train 45 million people in next 5 years, state government wants industry support
Press Release
by aiai-india

Maharashtra govt wants private companies on board to achieve its skill development target With a target to train 45 million people in next 5 years, state government wants industry support

With a target to train 45 million people in next 5 years, state government wants industry support

Mumbai, June 3, 2016: With a target of training 45 million people in the next five years, the Maharashtra government is now aggressively looking to tie-up with the private companies to train youngsters in vocational training.

So far, the state government has signed 19 Memorandum of Understandings (MoU) with top companies, which include Tata Group, Bharat Forge, L&T, ICICI, to name a few to achieve the ambitious number of skill training. Calling for major collaboration with the Indian industry as their main focus, Deepak Kapoor, Principal Secretary, Skill Development and Entrepreneurship, Government of Maharashtra said that partnering with the private companies for the modernization of Industrial Training Institutes (ITIs) is also on cards. “There are 900 registered ITI’s – the names and infrastructure is there, but what about quality of training? We want the industry to partner with us for the curriculum that is suited for their needs so that placement can be achieved,” said Kapoor in his key note speech at a seminar titled Make in India and Skilling India organised by the World Trade Centre, Mumbai.

Maharashtra has 2.44 lakh micro, small and middle size companies, employing 30 lakh people and around 62 lakh establishments employing 1.30 crore people. The state government is also making online registration process for the government would soon introduce an online process for private companies to enroll for Maharashtra State Skill Development Society’s skilling centres as part of the Pramod Mahajan mission program. “The registration will be seamless, no paperwork and we are providing financial grants in this skilling initiative. The mistrust between the state government and industry has to be removed to achieve the Skill India Maharashtra target,” explained Kapoor.

The IAS officer pointed out that time has come to change the mindset and uplift the skilled people, who are today at the bottom of the pyramid. “We want to partner with the industry to train people, certify them and offer them jobs,” he added.

Like Maharashtra, Goa too is working hard on its skill development projects. Mahadev N. Naik, Minister for Industries, Co-operation, HT&C and Social Welfare, Government of Goa, told the seminar that the government is aiming to generate 50,000 jobs in the next five years by imparting vocational training to women and youth in sectors like nursing and handicrafts. “Goa employs 90,000 people in its industry, but 50 per cent of them are from outside states because of deficiency of skilled workers in the state. We will change this soon,” he added.

Vagish Sharma, Analyst-Udaan Program Development, National Skill Development Corporation (NSDC) suggested that state governments across the country must implement a skill development programme on the lines of Udaan – a Rs 1,000 crore grant scheme, which is being implemented in Jammu & Kashmir. “It has transformed the future of 30,000 youngsters in the border state with the support of leading companies such as KPMG, Accenture, and Infosys with 100 per cent placements,” he stated.

On the other hand, Sunil Parekh, well-known international success coach, stated that time has come for change in the mindset of the employers, training institutes and the youth to address the issue of skill deficiency. “There is a communication gap between students, employers and the industry. No wonder there is a poor participation of the industry in skill development. The challenge is also to mobilise students towards developing their skills. But the bottom-line is – we need to change our mindset on how we treat people, who certain jobs like welding, plumbing, cooking etc.”

India can become a global manufacturing hub if it trains people in core skills as well as satellite (lean) skills, opined Jagmohan S. Bhogal, Cdr. (Retd), Senior Director, National Accreditation Board for Education and Training, Quality Council of India. “Zero defect zero effect rating must be given to MSMEs to empower them to join the global value chain. Along with core technical skills like plumbing, welding, satellite skills like lean skills (reducing wastage), quality skills, design and simulation, certification are also necessary. Global standards for skill development (for training providers ISO 29990, for assessment bodies ISO 17024) are key if India aspires to become a global design and manufacturing hub,” he added.

Earlier in his welcome address, Vijay Kalantri, President, All India Association of Industries and Vice Chairman, World Trade Centre Mumbai said, “PM Narendra Modi has set a vision for skilling the youth of the country and now the state governments should take this forward by reviving the skilling institutions that are closed because of certain reasons. All India Association of Industries and World Trade Centre Mumbai would extend all possible support to the Government of Maharashtra in effectively implementing its skill development programme. Skilling India also means developing new clusters and training local people for manufacturing goods at each and every village,” he added. 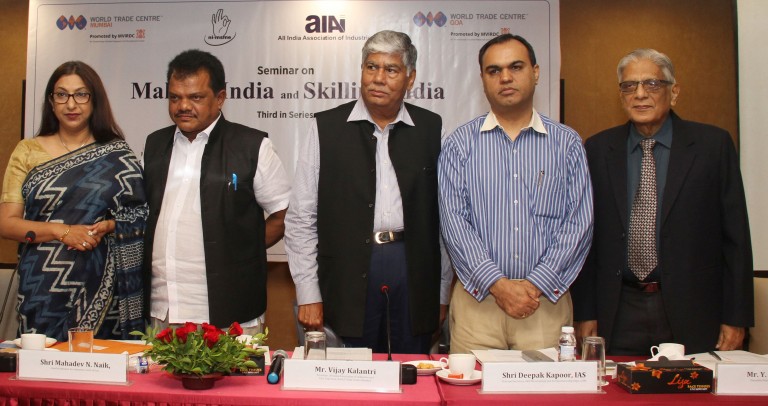