“Poland is a strong economy in the European Union and it is getting stronger with every passing year. Polish business leaders are looking for partners in India, which holds the future of global economy. There is huge scope for collaboration between both the countries in the areas of mining, food processing, steel, shipbuilding, information technology (IT) and ITES,” said Mr. Stawomir Majman, President, Polish Investment Agency, Poland during an interactive meeting organized jointly by All India Association of Industries (AIAI) and World Trade Centre Mumbai on February 13, 2016.

Inviting Indian companies to invest in Poland, Mr. Majman said Poland is the future of Europe and the country offers a safe and attractive investment climate for Indian companies. Poland is the only country in the European Union to grow steadily even during the aftermath of the global financial crisis in 2008. Some of the key pillars of the Polish economy are strong economic growth rate, robust growth in consumption and investment. Indian investment in Poland rose seven times in the last five years. However, there is plenty of opportunities for Indian companies to explore in the Polish economy.

Mr. Majman further added that Poland is a rapidly growing and exporting country in the world. Growth rate of investment in Poland is over 8% per annum.  Poland ranks 5th in the European Union on foreign investment, 3rd on job creation. The country has liberal labour policy and conducive economic policy for foreign investors. Poland witnessed rapid development in infrastructure facilities, especially in the last two years.

In his presentation, Mr. Michal Portalewski, Board Advisor, Airon Green Energy Turbines, informed that his organization offers cutting edge technologies in wind turbines, water turbines and solar energy sectors. He mentioned that his organization is keenly looking for appropriate business partners in India. There is considerable unmet need for electricity in India and hence there is scope for collaboration between India and Poland in this sector. Around 50% of the rural population and 25% of the overall population in India don’t have access to power. By 2024, nearly 75 million householders in India would lack access to power connections, he said quoting official estimates.

The Indian government has set ambitious target under the National Action Plan on Climate Change. Under this plan, the central government aims to generate 15% of electricity through renewable energy sources by 2020. By the same year, the government also aims to add 100 GW of installed capacity of wind energy.

India offers huge investment potential for foreign wind energy companies and it is the third largest market for wind energy technologies. Therefore, the Polish companies in this sector are keen to invest in India.

Speaking about his company, Mr. Portalewski pointed out that it offers installation services, storage technologies in the power sector besides offering technologies in the wind and water turbines.  The turbines produced by his company possess unique technical parameters and they are twice as effective as those of its competitors. The turbines are also environmentally safe.

Ms. Magdalena Panasiuk-Krasinska representing the Polish firm SuperDrob made a presentation on the poultry sector in Poland. She said the poultry sector in Poland is dynamic, highly efficient and also open for development. Poultry export from Poland is growing at a rate of 10-12% annually and it is the 3rd largest exporter in the European Union after France and Holland. Till 2012, Poland exported poultry products to countries in Europe, especially to England, France and Czech Republic. However, since 2012, the country started exporting to other countries like China. The country produces 2.5 million tonne of poultry per annum and of this 33% is exported. The poultry sector in Poland ranks 7th amongst all the countries in the world.

Earlier in his welcome remarks, Mr. Vijay Kalantri, President All India Association of Industries and  Vice Chairman, World Trade Centre Mumbai, said India and Poland enjoy strong economic and political relationship. The present level of bilateral trade between India and Poland is US$1.6 billion and there is considerable scope to enhance the same. The over 7% economic growth and the moderate inflation level of around 5% present conducive macroeconomic environment for Polish companies investing in India. The Indian government, under the leadership of Mr. Narendra Modi, is taking ambitious steps like improving the ease of doing business, promoting manufacturing sector through ‘Make in India’ campaign. According to Mr. Kalantri, India and Poland can explore co-operation in sectors like mining, food processing, steel, shipbuilding, information technology (IT) and ITES. 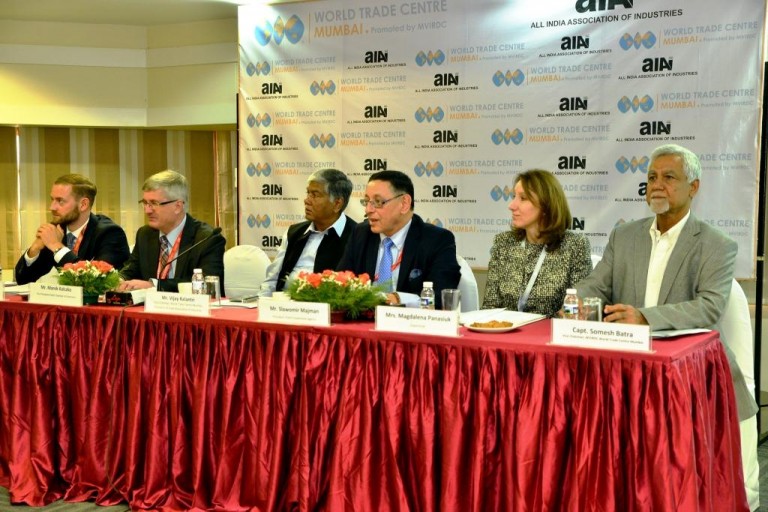